Social media is playing an ever-more important role in politics, and recent research in the UK reveals how one party applied smart digital targeting to focus digital media spend in key marginal constituencies. 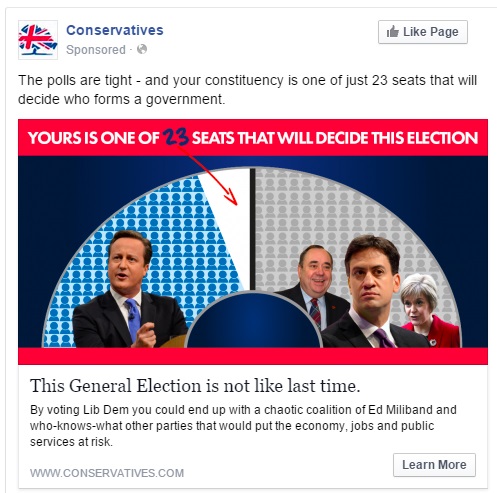 The Challenge
Many political groups and parties are blind to digital, while others enjoy both a high share of voice and a massive lack of competition The big opportunity is to target the message so each demographic and interest group hears the relevance of the policies rather than simply the topline noise of the campaign.
Ahead of the 2015 UK General Election, British parties were not allowed to buy TV and radio advertising by law but there are no such restrictions on online advertising.
This meant that whichever party has the most money could avoid restrictions and target adverts to a very narrow group of people.
In 2014, Conservatives had raised £29m in party donations, compared to 26m for Labour. (Source: Electoral Commission, 2014)
It also meant the Conservatives had less need to rely on campaign messages going viral of their own accord.
Lead by Communications Chief Lynton Crosby, the Conservatives were keen to target Facebook and YouTube ahead of Twitter.
The previous year, the party ran in-depth tests on display advertising, Google AdWords, Facebook and Twitter. They found that Facebook was the easiest way to reach the key voters in these vital locations.
Twitter, on the other hand, appealed to journalists and people who were already engaged with politics and unlikely to change their minds, the research found.
Speaking to Buzzfeed, lead Conservative campaign manager Tom Edmonds said: “It’s your mum and dad and your gran and granddad who are getting in there [on Facebook],” said Edmonds. “We’re looking for people in front of the telly, or on the bus on the way home, so we will be in their News Feed when they’re bored out of their mind.”
The Solution
The Conservatives massively outspent Labour on unregulated online advertising during the election, targeting marginal seats.
They spent £1.2m on Facebook advertising in the run-up to May’s general election, circumventing the media and push campaign messages straight into the News Feeds of key voters in marginal constituencies.
By contrast, Labour’s online campaign was run on a much tighter budget and focused on motivating supporters to volunteer on the campaign trail, as well as soliciting individual donations to fund the rest of the party’s election campaign. Labour spent just £130,000, although directly on Facebook in the 12 months before the election.
As the election drew closer, Edmonds and his 10-strong team – under the stewardship of Lynton Crosby, began producing bespoke content for specific voting groups around the country.
The selection of messages, each sent out to different types of potential Tory voter, were designed specifically with certain demographics in mind.
For example, one Facebook message targeted female UKIP waverers with the slogan:

“We’re building a brighter, more secure future for our children and grandchildren. A vote for UKIP, or any party other than the Conservatives, would let in Labour and the SNP – and risk everything we’ve achieved together over the last five years.”

Attached was a short video about the economic recovery.
In total, British political parties paid Facebook £1,370,512 before May’s general election, almost all of which was spent by the Tories. UKIP spent £91,322, the Lib Dems spent £22,245, and the SNP spent £5,466.
The Conservatives also spent £312,033 on Google advertising, against Labour’s £371. Google owns YouTube, which hosted paid-for Conservative video adverts during the election – again providing another route for the party to directly reach voters in marginal constituencies.

The Results
The party romped home to victory in the May 2015 General Election, winning a massive majority and shattering forecasts of a hung parliament. Despite Labour gaining a slightly higher increase on 2010 compared to the winners, the Conservatives won enough seats to form a majority government.
On the night, Labour lost nine key marginal seats that they expected to win, including Bolton West, Rossendale and Darwen, Blackpool North Morecambe and Lunesdale, Pudsey, Carlisle, Corby, Telford and Gower and Morley and Outwood. 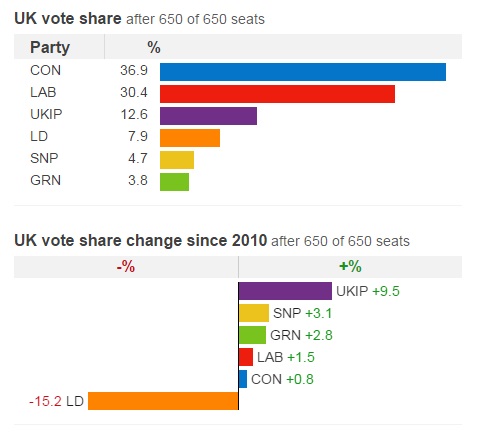 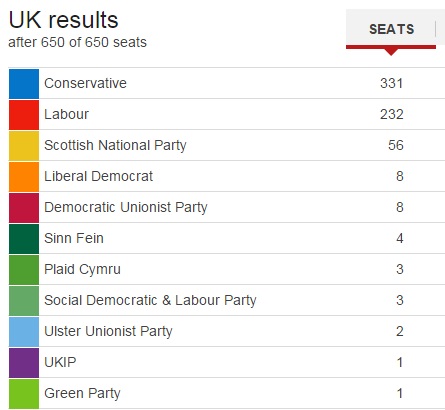 Homing in on these marginal constituencies and targeting older, less politically engaged users on Facebook (as opposed to younger, more politically savvy users on Twitter), appeared to pay off big time for the Conservatives.
Ipsos Mori and Ashcroft polling data after the election indicated that older voters over 65 were the most influential demographic for the Conservatives. Indeed both data sets showed that if voters aged over 65 were omitted, Labour would have won the popular vote in 2015 (35.6% to 33.6%).
2016 will be a big year for digital giving a competitive edge in politics and the US presidential elections this year will see digital as a battleground.
The Conservatives UK victory and social media investment, with implications for how pollsters work and how the campaigns measure their share of voice.
Speaking to Buzzfeed, Edmonds added: “Last election we spent 3 or 4 million on billboards. This time it was a fraction of that and we put the money into digital.”