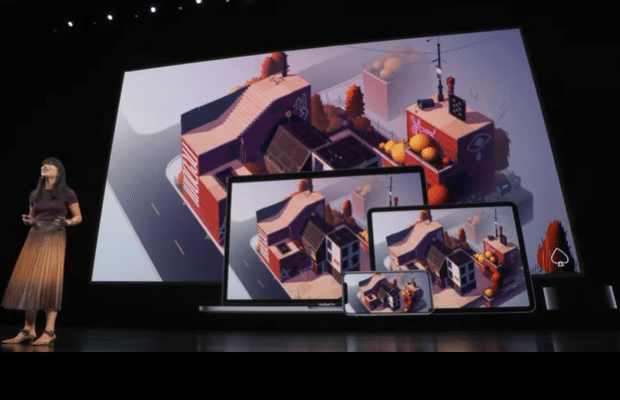 Apple has used its annual iPhone launch event to introduce detailed plans for its own streaming and gaming services.

At the event in California, the electronics giant unveiled the iPhone 11 Pro, and the iPhone 11 Pro Max, plus a new 10.2-inch iPad. This year camera upgrades take center stage, though the phones get speed and battery boosts too.

Apple opened its latest event by detailing its upcoming subscription services, which analysts have suggested are an effort to make up for stalling smartphone sales.

The Netflix-style Apple TV+ was given a launch date of 1 November, when it will arrive in more than 100 countries including the UK, where it will cost £4.99 a month for a family plan.

Apple Arcade is another subscription service featuring more than 100 games for iPhone, iPad, Mac and Apple TV, which will also be priced £4.99 a month for families and launch on 19 September.

View the full presentation below:

Latest iPhones- no 5G yet

Apple positioned the traditionally-named iPhone 11 as a successor to its cheaper XR model from last year, and also showed off two more premium options to replace the XS and XS Max.

Enhanced camera features were pitched as the main selling point for the iPhone 11 Pro and Pro Max, with both models boasting a triple-lens system on the rear to capture more detailed photos.

Apple showed off wide, ultra-wide and telephoto lenses, all 12 megapixel, which the company said made the two Pro smartphones the best it had ever made for photographers.

But the big boost to the camera – and a premium OLED display as opposed to an LCD – comes at a higher cost.

Apple chief executive Tim Cook said the new line-up was “jam-packed” with new features – but they were mostly modest tweaks and changes, with no mention of support for 5G connectivity or the return of a fingerprint reader.

Leaks have suggested that 5G, which is already being offered in parts of the UK, and other high-end spec bumps are being saved for next year.

The 2020 models will likely be the first iPhones built from the ground-up since the departure of British designer Jony Ive, who was a fixture of keynotes at the Apple campus in California until he left back in June.

Eleven days later, Apple will release a new iPad – a replacement for its existing standard tablet, not the Pro version, which will be priced at £349.

The company said it had been designed to take “full advantage” of the highly anticipated iPadOS – a new operating system that will further bridge the gap between the tablet and traditional laptops.

Compatible iPads will get a new Files app for more Mac-like folder management, support for USB memory sticks, and the Safari browser will be able to display fully-fledged desktop versions of websites.

The update should be ready for release in time for the new iPad on 30 September, while the next major iPhone software refresh – iOS 13 – will hit alongside the iPhone 11 range.The new iPad will cost £349.

Also unveiled was the Apple Watch Series 5, which has a new “always-on display” that no longer switches off when you lower your wrist, instead just dimming the brightness.

Apple has also included a built-in compass with the new wearable, which will work in tandem with the Maps app to help people navigate, and more premium models will be made of titanium instead of aluminium.

The new watch starts at £399, but prices escalate quickly depending on the casing and strap materials.

Apple’s share of smartphone users in the US will remain basically static in 2019, accounting for a 45.2% share, accordingto eMarketer.

https://www.emarketer.com/Android, by comparison, will account for 53.4% of US smartphone users. eMarketer expects Android to dominate smartphone usage through 2021.

In 2019, eMarketer estimates that nearly 53% of Americans will use a tablet at least once a month, totaling 174.7 million people.

This year, eMarketer estimates 37.3 million people in the UK will use a tablet at least once per month, nearly 56% of the population.

Apple TV is at the bottom of the US connected TV market, behind Roku, Amazon Fire, and Google Chromecast. This year, 24.6 million Americans will use an Apple TV device, or 12.6% of connected TV users.