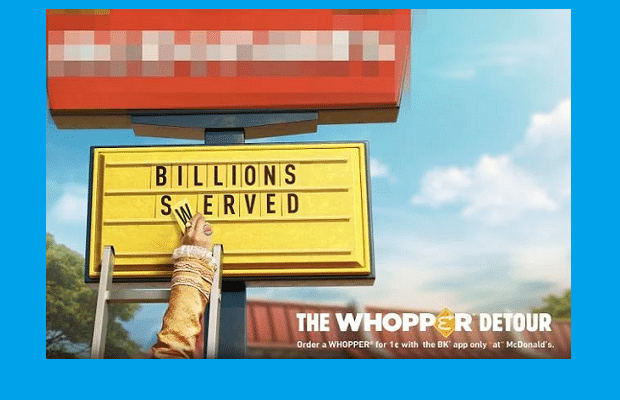 Burger King started sending customers to McDonald’s, making its customers download its app by sending them to the rival chain to claim a one cent burger.

The deal ran until 12 December 2018 and customers could only access it once.Burger King shared a video explaining how to order the Whopper sandwich on its US Twitter profile.

Mobile sales tripled during the promotions and the chain saw the highest number of store visits in four years. The chain estimated the campaign earned it a 37-1 return on investment.
Direct Lions jury president Nicky Bullard, chairwoman and CCO of MRM McCann, described the campaign as “pure genius.”

“It was completely brilliant—and complete is the word. It was a complete campaign,” she said. “It used data and targeting to make you feel something. It’s just pure genius.”
The Direct Lions often spark debate among jurors and industry observers about how “direct marketing” is defined when it comes to modern, integrated campaigns that don’t match up with traditional concepts like direct mail.

“It was a coupon. You can’t get more direct than that,” she said. “But it was done in a way that, culturally, was right at the moment and the way people were behaving. It was relevant. It was done in the spirit of the brand, that challenger spirit that Burger King has displayed year after year.”

“Whopper Detour” also won two golds across subcategories in the Direct Lions and four golds in the Media Lions, both of which were awarded today. Another Burger King campaign, “Burn That Ad” from David São Paulo, also won gold in Direct.

Fernando Machado, global CMO of Burger King, said “Whopper Detour” proves that the most obvious and convenient idea isn’t always the most effective.

Winning TWO Golds AND the Grand Prix… Congratulations to @FCBglobal in New York… A fantastic campaign for @burgerking. This is #WhopperDetour! #CannesLions pic.twitter.com/RXPqYJ8QVQ

“So, here is the deal. I will give you two options: Option A, you download the app and you get a free whopper. Options B, you download the app, input the credit card, drive to a McDonalds, order from there, pay one cent, drive back to Burger King and get your sandwich,” Machado said. “What do you think will work best? Well, we did option A, and our competitors did too. Didn’t work. No one cared about it. But when we did ‘Whopper Detour,’ which is pretty much Option B—we hit the jackpot. That’s the power of an idea. The power to bend logic.”

“‘Whopper Detour,’” he said, “is the most indirect idea to win the Direct Grand Prix in Cannes ever.”