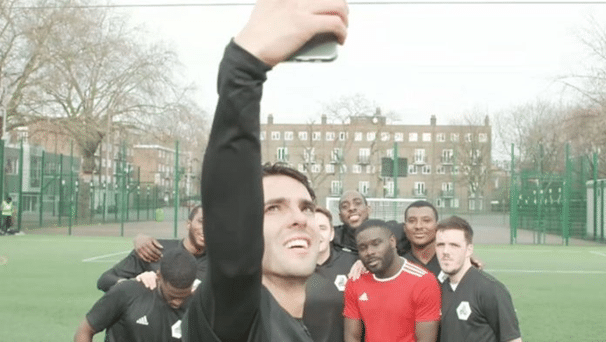 Adidas found a smart way to get WhatsApp working in its marketing, by creating a hotline to help amateur football teams replace missing players at the last minute. And to build excitement, they added the chance of some global superstar talent. A brilliant social media stunt that hacked the model of WhatsApp.

Adidas launched the latest iteration of its Predator football boots in 2020 with a campaign that focuses on the competitive advantage the boots provide players. In a saturated market of sports shoes, and in a bid to stand out from rivals Nike and Reebok, Adidas wanted a modern and relatable way of reaching its target market of amateur football players in the UK.

This key customer segment increasingly use WhatsApp to organise their amateur Sunday league football teams. WhatsApp groups are a notoriously difficult “dark social” channel to reach via advertising (where brands can’t track the source of users and social spaces where they’re unable to advertise).

The TV and online campaign – “100% Unfair” – was created to introduce Adidas’ new Predator Football boots: the Predator 20 Mutator. In an online video, Adidas promoted the innovative new features of the boots and emphasised the unfair advantage they confer on those who wear them.

The boot is advertised to have Demonskin, a layer of material designed to give footballers a greater grip on the ball, allowing them to generate more spin. The texture is spiked and wraps around the front and side of the boot, designed to align with key points of contact with the ball. In the campaign launch video, footballer Paul Pogba and former footballer David Beckham show off the boots and how the spiked layer enhances their skills, while others comment on the unfairness of the product.
WhatsApp is a key destination for social groups, sporting or otherwise, and finding relevant ways of getting people to include a brand in these private spaces is a challenge where many fail.

The campaign was created by TBWA\Neboko, Netherlands and the real hook was an activation on WhatsApp in London, created by agency Hill+Knowlton Strategies. Adidas set up a Rent-a-Pred hotline that amateur teams could contact to replace a team member who had dropped out last minute. The replacement player would then turn up wearing the new Predator 20 Mutator boots for the game.

How “rent a pred” worked

Further support in publicising the WhatsApp hotline number was provided by OOH outside the Adidas LDN Flagship, content published on partner channels such as The F2, Hashtag United, Fulham FC and Arsenal FC, and PR outreach to media and communities.

Adidas-sponsored players were made available for games last week once fans had shared some basic information with the hotline such as the game they need the player for. The company’s marketers would notify fans on the morning of their game if their request was successful. The rented players turned up dressed in Adidas’ new Predator 20 Mutator footwear.

Teams were notified the morning of their match if their request had been accepted. The footballers recruited were some of the top talent, including the F2, a UK football freestyling collective, and members of the Adidas family, including former England Legend Eni Aluko.

Having celebrity footballers turn up to play a six-a-side game in a quiet part of the city for a Sunday league game proved to be brilliantly talkable, generating PR coverage and authentic conversations across the amateur football fan base. Other stars taking part included former Brazilian national and Ballon d’Or winner Kaká , underscoring Adidas’ global credentials.

The “Rent-a-Pred” players worked as a PR mechanic. The clip of Kaká made TV news on a range of networks including Sky, ITV, and over sixty online publications. On social platforms, the Kaká appearance alone reached over 5 million views.

Getting into authentic conversations in social media has been a challenge since social media began. WhatsApp has proved particularly tough, so when brands “crack the code”, there are implications for many marketers.

WhatsApp has around 2 billion users globally, but was free of advertising at the time. Adidas has been a thought leader. Previously Adidas had been one of the most successful brands in the world at encouraging fans to join groups on these platforms (called Tango Squads), where those connected receive information about Adidas products before anyone else. WhatsApp has clearly been prioritised as a key channel.

This has allowed Adidas to build an intimate relationship with consumers across the globe, and the Rent-a-Pred campaign is another strong example of this strategy.

The campaign is a good illustration of micro targeting within Adidas’ broader customer base. The brand has created highly relevant communication for one particular segment, and that relevancy cuts through the clutter of communication in today’s world. It’s also enables one to one marketing – at scale. “It allowed us to build direct relationships with a smaller community of influential people in an ongoing way that doesn’t feel transactional and allows for a conversation, rather than just a broadcast,” said Laura Coveney, managing editor for Adidas’ newsroom in London where the campaign was managed.

“We know our audience use it to share fixture info, team selection — and team-mates messaging to find last-minute replacements,” said Coveney. “WhatsApp was perfect for the more functional elements of the ‘Rent-a-Pred’ hotline as it allowed consumers to share private information one-to-one with us for review, before being allocated a Predator player near them.”

The open rates for messages in WhatsApp will be “immensely” higher than the message platforms’ closest competitor, email. Brands that get this right will be the ones that understand just how private message platforms are and how privileged they are to be invited in.