DFS celebrates 30 years of sofa sales with Wallace and Gromit 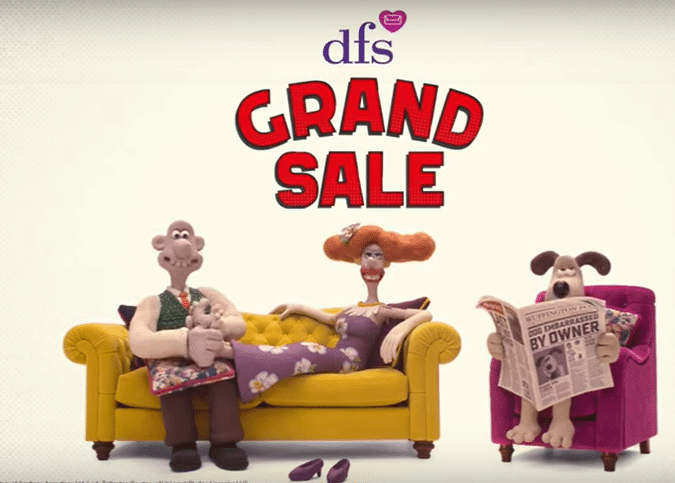 The campaign has been created by krow and directed by Aardman’s Magdalena Osinska in the traditional time-honoured method of stop-motion animation.

The cinema and TV spots also feature the voice of Academy Award nominee, Helena Bonham Carter as Lady Tottington. This is the first time Nick Park, who was Aardman’s Creative Director on this campaign, has worked with Helena since she voiced the same character in the Academy Award®-winning Wallace & Gromit: Curse of the Were-Rabbit in 2005.

The spots begin with Wallace trying to win Lady Tottington’s affection by inventing the ultimate sofa for her, complete with a built-in foot massager. But, as with most of Wallace’s contraptions, things don’t go to plan.

Luckily, Gromit saves the day by enlisting the DFS craftspeople to make a sofa for Lady Tottington. The sofa featured is part of DFS’ Joules collection, who also partnered with Wallace & Gromit as part of their 30th year celebrations.

Nick Ashworth, Marketing Director at DFS, said: “We have built a successful relationship with Aardman and the new collaboration with Wallace & Gromit, is the next logical next step for our partnership. As brands, we share similar values and have the same commitment to quality craftsmanship. Wallace & Gromit are the perfect fit for our core target segments and allow us to show how we can bring comfort and quality to families this Christmas.”

Darryl George, Creative Director at krow, said: “We’ve teamed up with Wallace & Gromit to bring some much-needed cheer into the nation’s homes. And to show that, with DFS, even people famed for wearing the Wrong Trousers can find the right sofa.”

Nick Park, creator of Wallace & Gromit said: “Wallace & Gromit’s world goes together so well with DFS, there’s a cosiness and warmth, but also an attention to detail and ‘handmade’ feel. It was fun for me to introduce Wallace to the DFS factory – he looked impressed by the care and attention that DFS put into their hand made sofas! I was also very excited that Helena Bonham Carter returned to perform Lady Tottington’s character who we haven’t seen on screen since the Wallace & Gromit movie ‘Curse of the Were-Rabbit’, 14 years ago.”