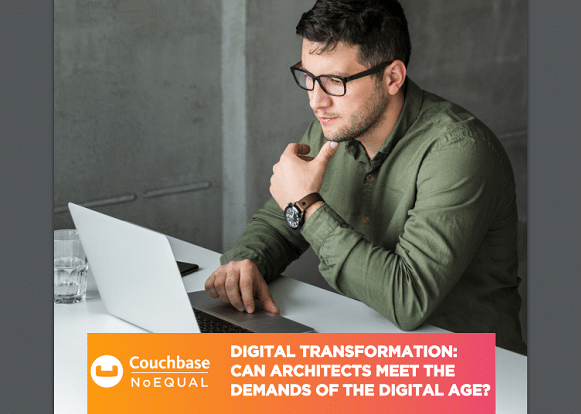 Digital architects are struggling to meet their organisations’ digital transformation ambitions, and are feeling the pressure as a result, according to new research.

The study, from Couchbase, indicates that most architects are finding getting the right technologies in place overwhelming.

In a survey of 450 heads of digital transformation responsible for managing data architecture at enterprises across the U.S., U.K., France and Germany, 85 percent of respondents were under pressure to deliver digital projects – with 41 percent experiencing “high” or “extremely high” pressure.

The research also suggests that in many cases, the technology architects rely on is holding them back, to the extent that 80 percent of them have had to scale back ambitions for new IoT or mobile applications because of challenges with using data.

This is not helped by the apparent scale of the challenge facing architects. Sixty eight percent of respondents said that getting the right technologies in place for digital transformation can seem an insurmountable task, while 80 percent have had to scale back ambitions for new IoT or mobile applications because of challenges with using data. There is a clear need to overcome these challenges as 78 percent of respondents say their organisations have moved beyond planning digital transformation and are actively working on delivering projects.

Against this background, architects are still struggling with their database technology. Sixty percent of respondents stated that too much of the IT team’s time spent working on digital transformation projects is wasted dealing with legacy technologies. In addition:

“As digital transformation moves from plans to reality, architects have the critical role of ensuring that business ambitions can be realised,” said Ravi Mayuram, SVP of Engineering and CTO, Couchbase. “In this new era of utility computing powered by the cloud, the architect’s role is even more critical. They have to understand, evaluate and recommend the right technologies and become the essential bridge between the business and developers. They are the ones to future-proof the technology choices that form the foundations of the architecture for digital transformation projects. They are the ones to marry disruptive technologies that are being developed and brought to market with business initiatives that are underway to stay relevant in this modern economy – enabling businesses to transform, compete and win in their markets.”

It is clear that organisations are still heavily invested in their relational databases. Thirty nine percent of enterprises said they continue to use them over newer alternatives because of the architecture built up around the database itself. Thirty percent do not want to retrain or up-skill their staff after already making significant investments, and 29 percent say it would be too complex to replace relational databases. However, capability is less of an issue – only 15 percent don’t trust newer databases with business-critical data or applications. There is also the issue of increasingly sprawling database architecture. Sixty three percent of respondents say their organisation is using more databases than it should be, and 20 percent say it’s hard to cope.

While they are facing challenges, there are also signs that data architects, and their organisations, are exploring new ways of deploying databases, and looking to take advantage of transformative technologies. The most commonly supported deployment model for database infrastructure is private cloud (used by 50 percent of enterprises) – followed by fully flexible hybrid cloud (used by 45 percent), on-premises (39 percent) and public cloud (34 percent). Thirty one percent use Database-as-a-Service. When asked what transformative technologies they are using, or plan to use, 80 percent are already using mobile, or plan to use it within the next 12 months. In contrast, 50 percent are using, or will be, edge computing; 42 percent augmented or virtual reality; and 51 percent blockchain. However, respondents are less clear on which technologies will have the most revolutionary impact on digital transformation projects – AI, cloud computing and big data analytics were all similarly rated.

“Taking advantage of new technologies requires new ways of approaching architecture,” continued Mayuram. “Realising the full potential of modern databases; microservices; AI technologies; and edge computing – such as in mobile apps and IOT – to name a few, requires serious thinking. Architects are tasked with making the right technology choices and picking the right vendors that will guarantee their initiatives’ success. In this developer-driven economy, architects will lead this digital transformation by evolving the application and system architectures in a responsible manner, whereby businesses can make a quantum leap with minimum disruption.”

The full Couchbase report can be found here

The report is based on an online survey conducted in summer 2019 by Vanson Bourne, an independent market research organisation. The survey included 450 heads of digital transformation responsible for digital architecture, such as CIOs, CDOs, and CTOs, in organisations with 1,000 employees or more in the U.S., U.K., France, and Germany.