Diversity in Advertising report: UK lags behind US for representation 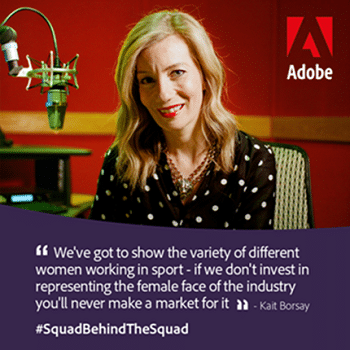 With digital advertising soon to turn 25, Adobe conducted a global survey of over 2000 consumers in the US and UK across generations, gender, ethnicity and sexual orientation to understand what progress is being made when it comes to diversity representation.

The research revealed that for women, ads aren’t hitting the mark when it comes to reflecting gender diversity

UK lags behind the US when it comes to making progress.

Diversity leads to trust but failure leads to customer spurn

Adobe Stock’s Squad Behind the Squad

Striving to ensure that content is reflective of society, and to support creatives production of diverse work, Adobe has released a collection of images which celebrates women in football, a traditionally male-dominated work environment.

The Adobe Stock collection features five inspirational women working at the heart of the football industry – from footballers and referees, to sports presenters and FA intermediaries – giving them a platform to tell their story and empower other women to follow in their footsteps.

The five women photographed for the collection are;