Interview: BBC quizzes creative leaders on how to build a strong studio culture 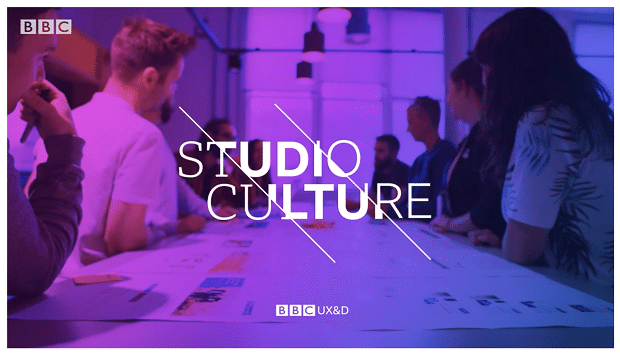 In this video documentary, Code Computerlove joined forces with the BBC’s user experience and design (UX & D) team to delve deeper into how other major players in the design industry are tackling the topic of ‘studio culture’, gathering secrets, tips and top advice from agencies including AKQA, Co-op Digital, Google, and ustwo.

One of the major challenges in modern tech-led businesses is how to manage large, diverse groups of designers working in multi-disciplinary product teams, often spread across different locations.

But, as some of the world’s most successful tech businesses have proved, creating a positive studio culture with the right approaches, processes and tools can deliver huge rewards, both in terms of the quality of work, end user experiences and stimulating team morale.

Engendering a prolific studio culture is a goal shared by the BBC – with its 200-strong multi-disciplinary team working together to design the BBC’s digital experiences – to digital agencies with the same product-mindset and human-centred approach such as Code Computerlove, AKQA and ustwo.

As a design roster partner to the BBC, Code Computerlove joined forces with the BBC’s user experience and design (UX&D) team to delve deeper into how other major players in the design industry are tackling the topic of ‘studio culture’, gathering secrets, tips and top advice from agencies including AKQA, Co-op Digital, Google, and ustwo.

The short film was a collaboration between the BBC’s Andrew Nott, Creative Director of GEL (UX&D), Code Computerlove and Andy Davies.

The 14-minute long documentary can be accessed in full on the BBC’s GEL (Global Experience Language) site, https://www.bbc.co.uk/gel/articles/what-is-studio-culture

Speaking of his own experiences and video highlights, Tom Bradley, Design Director at Code Computerlove, says: “When I moved from the BBC to work at Code I quickly realised that the challenges for creative leadership were more the same than different. Even in a business with less than 100 people, our team of designers were still distributed around the business into multi-disciplinary teams – with very different clients – so the value of working together as a discipline could be difficult to justify.

“I’d learned lots of methods for building effective teams at the BBC, but I always wondered if other organisations had tried things that we hadn’t thought of. So, together with Andrew Nott, we decided to find out.

“Our video sets out to explain why building and maintaining a culture is important to the design leaders and creatives we interviewed; what they’ve tried over time, what’s worked, and what they’ve learned. We hope by creating this short doc, organisations of all sizes find something of use to take from it.

“It’s certainly a must see for designers entering the industry, to understand better the realities of being a designer in a tech-led business and how product teams work.”

Tom continues: “There were lots of shared experiences and common themes, from routines and tools, to sharing and collaboration.

“Of particular interest was a point made by Helen Fuchs, Design Director at Ustwo. She says ‘because we work in product teams you’re balancing lots of different disciplines, tech leadership, design leadership, product leadership all happening within a project team, but it feels like there’s always important moments when you come together as a discipline and critique each other’s work, feel inspired, and talk about those things that are specific to your discipline.’ This is so true and such an important part of studio culture, sharing ideas and experiences and not working in isolation.

“Most of the interviewees outlined how important critiquing work, continually learning and adapting and the visibility of the work within the whole studio was key to achieving a vibrant studio culture.

“In the documentary, collaboration was another key talking point. Being a player coach – not a floating figure head that pops up for important meetings and then vanishes – is another point that I whole heartedly concur with.”

Summing up studio culture, Google’s Creative Director – Material Design, Rachel Been says, “Instead of looking at just evolving your craft, it’s about understanding a multitude of other skill sets and having empathy for other people in order to make a more holistic better product.”

Katherine Wastell, Head Of Design – Co-op Digital, concluded: “It’s important for studio culture that people are communicating even though they might be spread across different product teams, making sure they come back together to improve what they are doing.

“Making sure that people are continually learning from one another and new practises are being influenced into the way they work. If I couldn’t do anything else, this would be the one thing I’d do.”