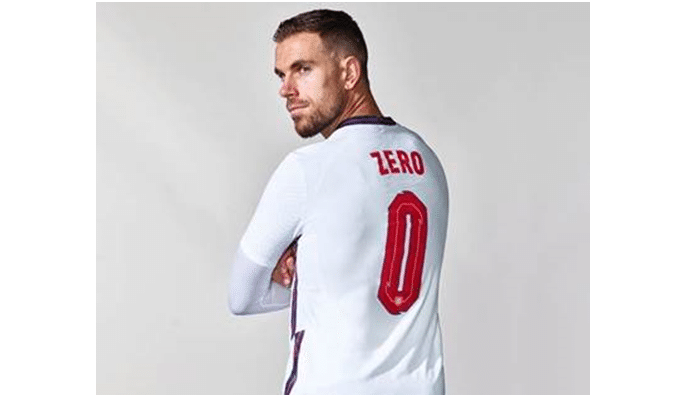 Liverpool FC captain and England vice-captain Jordan Henderson has today announced a move to a new team this January - #TeamZero, an initiative from Budweiser to encourage consumers to make smart drinking choices.

A major push for the brewer’s 0% ABV Budweiser Zero, #TeamZero is a social movement to help consumers use Dry January as a springboard to focus on their health, wellbeing and personal ambitions for the year ahead with fewer distractions – starting 2021 the way they mean to go on.

People can sign up to #TeamZero by visiting jointeamzero.com, giving them access to exclusive discounts, merchandise and prizes, including tickets to England home games and signed England shirts – all while committing to their ambitions and seeing others’ successful progress.

Budweiser is launching #TeamZero as research for Dry January reveals that a record number of people are planning to take on the challenge this year, equating to one in five people (20%) who drink alcohol.1

It builds on research which suggests that Dry January is more successful when approached as a group activity, with Henderson – already a leader for club and country – helping teammates stay focussed and motivated.2

Alongside #TeamZero, these options form part of Budweiser Brewing Group’s commitment to offer greater choice to beer lovers who want to moderate their drinking, and to influence social norms to reduce the harmful use of alcohol. To that end, the brewer’s Global Smart Drinking Goals include the target of at least 20% of global volumes being no- or low-alcohol by 2025.

In the UK, Budweiser Brewing Group is also a founding member of DrinkAware and a partner of mindful drinking organisation Club Soda.

Jordan Henderson said: “As a Premier League and international footballer, performance is everything. Choosing an alcohol-free beer means I don’t need to compromise my ambitions. Sometimes, for all of us, deciding not to drink can give that extra focus and edge needed to succeed – and even if only during Dry January, it can still help you start as you mean to go on.

“And you don’t need to do it alone. January is an opportunity for a fresh start. I’d encourage everyone to join me in #TeamZero and let’s do Dry January with Bud Zero, together.”

Amar Singh, senior brand manager, Budweiser, said: “Jordan is an inspirational leader, on and off the pitch. Throughout his career he’s demonstrated a relentless desire to challenge himself, improve and succeed, which makes him the perfect choice to be captain of #TeamZero.

“We didn’t compromise on flavour when creating Budweiser Zero, so there’s no need to compromise when making smart drinking choices. You don’t have to choose between a great-tasting beer with friends and going to the gym, or a post-work drink and getting in early the next morning to be ahead of the game. That’s why we created #TeamZero, so Dry January can be a social activity, too.”

Budweiser Zero is zero alcohol, zero sugar and 46 calories, but with the same iconic taste as Budweiser. It was created using the latest developments in no-alcohol brewing, following years of taste testing. It is brewed with premium Budweiser barley, hop and malt through the same Beechwood Ageing technique that delivers the smoothness of Budweiser, along with a revolutionary 4x-cold-filtration process.

Budweiser Zero is available across the grocery, convenience and wholesale channels in a 330ml x 4 pack can format priced at £3.00.