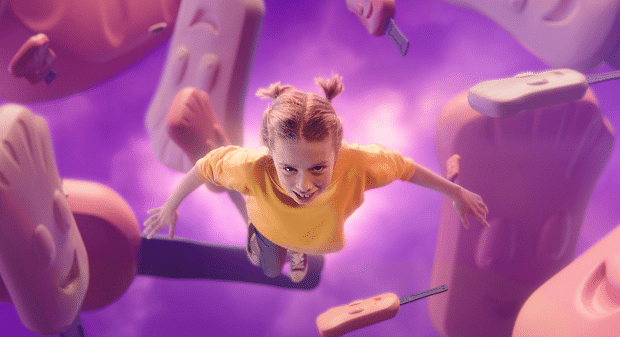 The campaign will be formed of two adverts running across TV, video on demand, social and radio. One advert will focus on the entire Strings & Things product portfolio: Cheestrings, Cheeshapes and Yollies, while the second will focus solely on Cheeshapes. The TV adverts will launch on 26th August and will have various spot times including during the first episode of this series of Great British Bake Off and run through to the end of September, to coincide with children heading back to school.

The central ambition of the campaign is to highlight the expansion of the Strings & Things Masterbrand as well as raise awareness of the new brand name. Strings & Things now includes the popular Cheestrings as well as a broader range of products across children’s snacks. Cheestrings has become a household staple over the past 23 years, with 4 million Cheestring buyers[1] and a £49m RSV[2]. The full range now includes the newly launched Cheeshapes as well as Yollies, a yoghurt-based snack.

The TV support is expected to reach 69% of the Strings & Things core audience while the video on demand and social media push is expected to reach 10.2m people. Running alongside the TV advert, the brand awareness will be reinforced through radio over indexes with our target gatekeeper audience. Overall, the campaign is expected to have an 81.7% reach and 11 OTS.

The full-length 30 second advert shows a mum bringing in the shopping, while her daughter comes across a packet of new Strings & Things Cheestrings in the bag and proceeds to eat one – demonstrating the playful, stringy nature kids have come to love of Cheestrings. The young girl is then pulled into the bag and transported into the exciting and playful world of Strings & Things where she is introduced to the new range. The final shot introduces the new products available including Cheestrings, Cheeshapes and Yollies.

The shorter 10 second advert focuses on the newly launched Cheeshapes, with a young girl opening her pack of Cheeshapes icons. Upon doing so, she is surrounded by a range of fun and imaginative shapes – mirroring the shapes that are available within the pack – before both the icons and random packs are shown on screen. As with all Strings & Things innovations, Cheeshapes has been co-created with kids and approved by mums. Cheeshapes are available in two ranges – randoms and icons – and allow for imaginative play that brings creativity to children’s snacking. Each piece is made of real cheese; providing a source of Calcium and vitamin D, while containing under 100 calories per pack.

Victoria Southern, Marketing Category Director at Kerry Foods, says: “We’re very excited to launch our first ad campaign under our new Masterbrand – Strings & Things, and to highlight to consumers the full range of exciting products that come under this. The ad is light-hearted and playful to mimic the personality of the range and will launch just in time for children to return to school where we hope Strings & Things products will become lunchtime staples.”

The TV advert is set to launch next week from 26th August, with slots during The Great British Bake Off. The main aim of the advert is to raise awareness of the brand name, which is highlighted through the upbeat and catchy music, as well as showcasing the range.