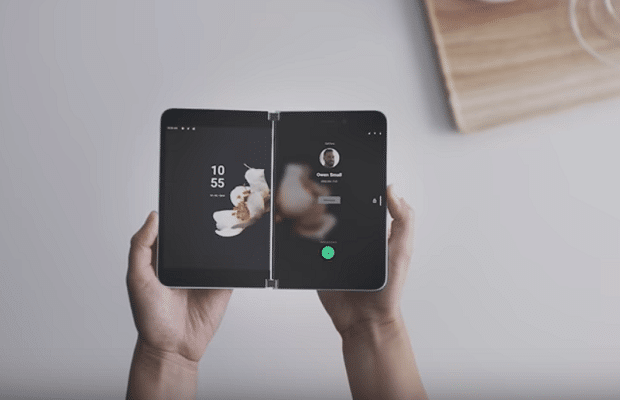 Microsoft has revealed two devices with hinged, dual touch screens, as the electronic giant looks to offer an alternative to 'foldable phones'.

Unlike Samsung and Huawei, the firm has not adopted a bendable screen, but instead will fold flat on hinges. The devices are still in the early stages of development.

The Surface Neo consists of two screens which open up to a 13in display with a split in the middle, and runs Windows 10X, a variation of the operating system designed to run on dual-screen devices.

The Surface Duo works as a smartphone and opens to 8.3in and runs on Google operating system Android.

The Surface Neo can be positioned like a typical laptop, with an additional keyboard placed over the lower screen. In this configuration, the remainder of the screen acts as an extension to the keyboard, similar to – but larger than – Apple’s Touch Bar.

The smaller device, Surface Duo, will be seen as a competitor to Samsung’s Galaxy Fold. Unlike Microsoft’s effort, Samsung has managed to create a bendable screen made from plastic rather than glass. However, the product was delayed after reports of extreme unreliability. Despite adding reinforcements, the firm still recommends a “light touch” when using the $2,000 device.

“It’s a new expression of Windows 10 that we’ve been designing and building for the last couple of years, with hundreds of engineers and designers at Microsoft,” said Carmen Zlateff, Microsoft Program Manager for Experiences and Devices. “Our goal is to fuel a new era of mobile productivity and creativity across two screens.”

During the Surface Neo demonstration, Zlateff showed how the twin displays can be used with multiple apps open and how they can be quickly reorganized depending on what position the device is in and what needs to be visible.