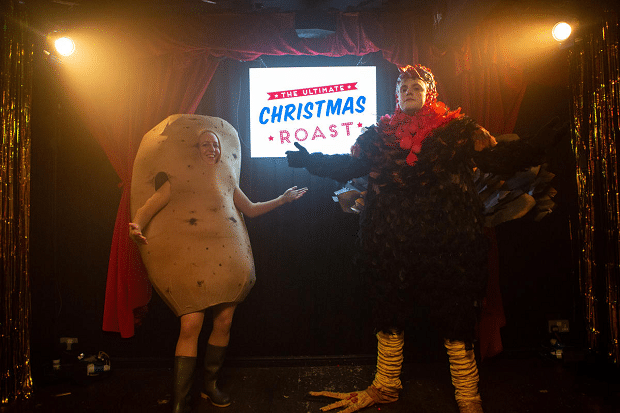 ‘Turkey vs Potato, The Ultimate Roast Battle’ is Greenpeace UK’s alternative Christmas ad. Inspired by the popular ‘comedy roast’ format and made by agency Nice and Serious, the ad is all about the laughs at first but ends with a serious point about meat and its links to deforestation.

Set in a dingy comedy club, it sees two stars of a traditional Christmas lunch – Turkey, played by Jack Barry (who also wrote the script) and Potato, played by Annie McGrath – locked in a comedy roast battle. The burns are harsh, and the crowd is loving it until Potato takes it too far, exposing Turkey’s dirty little secret.

Turkey has been gobbling up feed most likely grown on deforested land in South America. In fact, 90% of the soya imported to Europe is used for animal feed and two thirds of the UK’s soya is imported from South America, where it is a leading cause of deforestation.

Over half the soya we use in the UK is fed to poultry. Using the Roundtable on Responsible Soya’s own calculator, Greenpeace UK estimates that an area of land the size of Glasgow would be needed to grow enough soya to fatten the 10 million turkeys Brits eat every Christmas.

Chiara Vitali, Forest Campaigner at Greenpeace UK, said: “In our film, Turkey is well and truly roasted. But let’s be clear, this isn’t all his fault. He’s not even that old – 6 months tops – so he doesn’t know any better.

“But the factory farms fattening turkeys for Christmas will know the feed they use is linked to forest destruction. Supermarkets do, too. Did you really want your roast with all those forest trimmings?

“We can all make a choice to eat less meat. The world’s top scientists say it’s vital to prevent climate breakdown. But supermarkets like Tesco, Asda and Sainsbury’s, who’ve all pledged to remove deforestation from their supply chains, bear a significant weight of responsibility. This isn’t about switching from one type of feed to another. They need to listen to the science and replace most of the meat they’re selling with plant based alternatives, and they need to do it fast.”

Peter Larkin, Creative Director from Nice and Serious said: “To humorously expose the ultimate Christmas conspiracy, we brought two of the main ingredients of Christmas dinner to life in a gloriously surreal fashion. With the rise in popularity of comedy roast battles, we realised we had the perfect characters to create the ultimate showdown.”