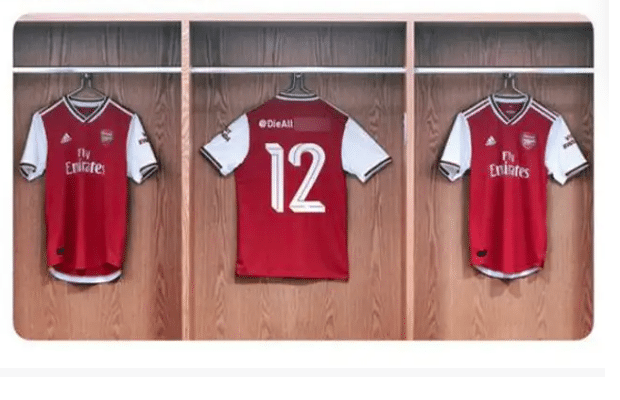 The football club’s new kit makers let fans to put their own Twitter handles on the back of a virtual shirt, which was then tweeted out from the @adidasUK account.

The sportswear brand has united with the London football club for the first time in 25 years, and was attempting to generate excitement through an interactive publicity stunt.

Anyone who used the hashtag #DareToCreate automatically received a reply from Adidas UK’s account featuring their Twitter handle on the back of an Arsenal shirt.

But images of Arsenal kits referencing Adolf Hitler, Madeleine McCann and the Hillsborough disaster were subsequently shared when Twitter users realised the artificial intelligence tool did not filter out offensive usernames.

The images were accompanied with a link inviting the user to buy the personalised shirt.

The campaign was described by one observer as a “marketing catastrophe” as many of the posts were widely retweeted for several hours before were deleted.

Many were baffled as to why Adidas had launched such a campaign, with Walkers Crisps and the National Lottery suffering similar abuse when they used personalised marketing.

An adidas spokesperson told the Huffington Post: “As part of our partnership launch with Arsenal we have been made aware of the abuse of a Twitter personalisation mechanic created to allow excited fans to get their name on the back of the new jersey.

“Due to a small minority creating offensive versions of this we have immediately turned off the functionality and the Twitter team will be investigating.”

Meanwhile, an Arsenal spokesperson told The Sun: “We totally condemn the use of language of this nature, which has no place in our game or society.

“We work hard as a club to encourage diversity and inclusion through our Arsenal for Everyone programme, launched in 2008 as a celebration of the diversity of the Arsenal family.

“Through a number of initiatives undertaken in the community, inside Emirates Stadium and throughout the club, Arsenal strives to ensure that everyone associated with the club feels an equal sense of belonging.”

The tweets have all since been deleted from Adidas’ U.K. account. But this is yet another example of a social media account generating messages, using artificial intelligence and bots, gone wrong.