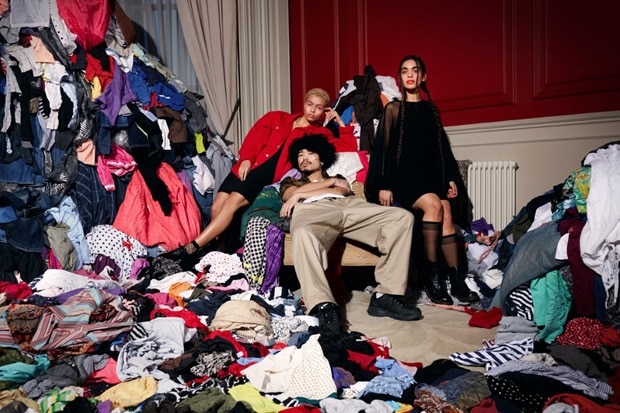 Featuring recycled looks curated by renowned stylist Miranda Almond, against a backdrop of 3.5 tonnes of clothing waste – the same amount discarded every five minutes in the UK.

The Rewear Edit will feature on the London Fashion Week schedule to encourage people to embrace more sustainable ways to care for their clothes, knowing single-use clothing costs the UK consumer £2.7bn[4] each year on clothes that will only be worn once before being discarded.

The short film capturing the process of creating the Rewear Edit follows Almond as she creates new looks from items discarded too soon, learning about the consequences of this throwaway mindset in the process. The film sees the reimagined looks brought to life in a stunning, yet confronting, fashion shoot, as the models showcase the looks against a sea of 3.5 tonnes of clothing waste.

One Green Bean, London, was responsible for developing the activation and associated film, brought to life by Borderland Studios and directed by award-winning duo Simon Frost and Ben Hanson.

The film was also supported by an exclusive collection of high fashion photography captured by photographer Marco Mori, a London photographer known for his keen eye for fashion.

Cigdem Kurtulus, Chief Marketing & Digital Officer for RB UK & Ireland said: “Building a sustainable fashion industry isn’t just up to the fashion experts. It’s up to everyone, including us here at Vanish and RB. We want to help consumers understand responsible garment consumption and behaviour. We launched the Rewear Edit to demonstrate the sheer potential that sits in items that we throw out without a second thought. Our hope is that it encourages the nation to look at their wardrobe in a new light.”

Kat Thomas, Global Executive Creative Director at One Green Bean London said: “We wanted to highlight the huge impact of our throwaway behaviour when it comes to clothes, and demonstrate that with a little care, attention and creativity you can turn something regularly found on a landfill site into something worthy of London Fashion Week.”

The launch forms part of Vanish’s role as Official Partner of London Fashion Week within the wider partnership with the British Fashion Council (BFC), all part of Vanish’s global mission to let clothes live many lives, by promoting responsible clothing production and consumption.

Watch the creation of the Vanish Rewear Edit and learn how choosing to love your clothes for longer will help ease environmental impact here.