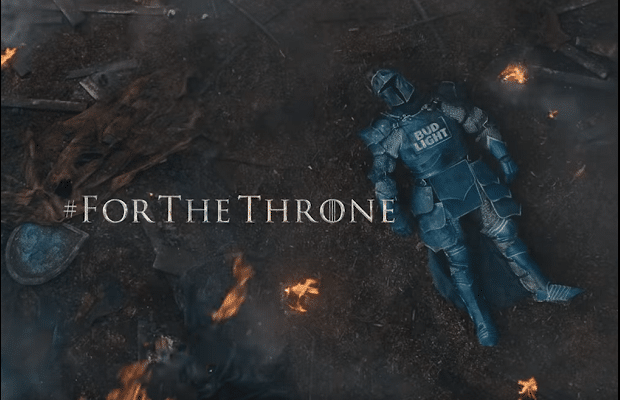 Bud Light capitalised on the climax of Game of Thrones this year with a big budget Super Bowl ad.

The ad opens on a medieval jousting scene, where we are introduced to competitor, the Bud Knight.

The jovial light-hearted scene, follows on from the series of ‘Dilly Dillly’ medival-themed ads AB InBev have run since 2017. However, the tone gets darker as the commercial progresses.

As the Knight is knocked from his horse by a mountain-like figure and is subjected to a similar death to Oberyn Martell, it is then that the audience realises they are actually watching a promo for the final series of Game of Thrones.

The ad was quite bold, as the brand essentially killed off their mascot. This ad was realized by advertising agency Wieden + Kennedy in collaboration with HBO and Droga5.
The Super Bowl ad is part of the $20 million marketing campaign for the show’s final season.

The Wall Street Journal called the commercial “the biggest and boldest marketing tie-ins the AT&T Inc.-owned cable network has ever orchestrated.”

The commercial had input from a director of the HBO show, and a few other ideas for the spot were scrapped because the show was worried it would give away too much of the season finale’s plot line.