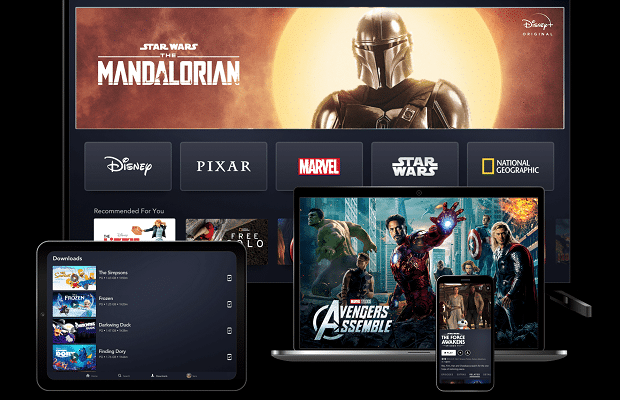 Disney has gone live in the UK and western Europe as streaming and TV viewing surges with coronavirus keeping millions of people at home.

However, the launch in France has been delayed until 7 April at the request of the government to reduce pressure on broadband networks.
Disney, Netflix, Amazon’s Prime Video and YouTube have all agreed to reduce the speed they deliver video streams to customers across Europe for a month to reduce congestion as online usage soars.

Analytics firm App Annie has recorded double-digit percentage increases in the amount of hours spent using entertainment and video streaming services, such as Netflix and Amazon’s Prime Video, in recent weeks in European countries hit badly by the virus such as Italy.
The same pattern is expected to be seen in the UK with TV viewing figures already soaring this weekend following the government’s move to shut pubs, bars and restaurants on Friday.

Amy Jackson, Business Director at Incubeta comments: “Unlike some video and TV subscription services where consumers have to pay a premium for an ad-free experience, Disney+, as an ad-free platform, is potentially missing out on a plethora of new sign-ups by not launching earlier. As much of the UK is forced to work from home due to Covid-19, it’s predicted subscription video on demand (SVOD) consumption will increase by 60%. That being said, there are other elements to take into account as to why launching earlier isn’t a possibility; mainly commercially, to get access to exclusive content, it will need to adhere to production and distribution companies’ exclusivity conditions.

“There is a lot of hype surrounding television on demand (TVOD) and live streaming services at the moment, so there is high demand. Despite the very competitive market, Disney+ has a brand and content library strong enough to entice subscribers.”

Vincent Soucaret, Head of Video Advisory at Xandr, comments: “Consumer viewing habits are becoming increasingly fragmented across devices and channels. As a result, marketers traditionally situated solely in the TV or digital video ecosystem are reevaluating how they plan, buy and measure advertising to reach key audiences however they view content. With the rise of streaming services like Disney+ and Connected TV (CTV) specifically, advertisers have the opportunity to deliver campaigns which can be activated, optimized, and analysed more quickly and potentially more accurately than traditional TV.”

Anthony Capano, MD International, Rakuten Advertising, said: “The launch of Disney+ in the UK is a reminder that consumers need more flexibility than they’re being offered by the current video on demand market. Not only are there so many subscription-based models to pay for, but access to content has become increasingly fragmented, with deals being struck to take certain franchises in and out of platforms.

“All this has not worked in favour of the consumer. The basic model that built the traditional TV ecosystem and made it great for consumers in the UK was the balance of being able to subscribe for unabridged access to video content on certain platforms, while enjoying anytime access to other films and programmes via advertising-supported channels. This same offer needs to be created in a digital world to give consumers real choice over what they consume.

“With 13% of consumers now relying solely on streaming services and going without traditional TV, advertising supported video on demand (AVOD) is going to become a more substantial player in the connected TV ecosystem. Brands should consider capitalising on the benefits of this marketing channel. It enables them to reach young, affluent demographics and deliver personalized, engaging content, all in a brand-safe environment that fosters consumer consent. The audience sees value in engaging with brands in exchange for accessing content, so it’s win-win for viewers and advertisers.”

Dave Castell, GM Inventory and Partnerships EMEA, The Trade Desk: “The hotly anticipated addition of Disney+ to the UK’s streaming pot will surpass subscription boiling point. Our research suggests that £20 is the maximum amount two thirds of UK consumers would spend on streaming services, so, for many – especially families looking for child-friendly entertainment options – signing up to Disney will mean cancelling another streaming subscription. All eyes will be on which will be the first to go.

“The pressure is on to win valuable consumer eyeballs. And while people are inevitably spending more time in front of the TV screen right now, purse strings are being tightened and streaming services that fail to deliver a quality service will take a hit. But creating new, premium content and gaining rights to popular back catalogues comes at a cost – and a steep one at that.

“It’s always only been a matter of time until some of the big players, like Netflix, introduce advertising to bolster their coffers, and the entrance of Disney+ will speed this process up significantly. We found that 59% of users are open to advertising if it means accessing content for free, suggesting that taking a ‘freemium’ approach would be mutually beneficial for consumer, advertiser and platform alike -particularly in the current climate.”

Mark Inskip, CEO UK & Ireland of Kantar’s Media Division, said: “With the streaming wars ongoing – and the COVID-19 pandemic driving many indoors – the launch of Disney’s ‘Disney+’ streaming service comes at a very interesting time for the industry and for consumers alike.

“New research from the team at Kantar shows the service has much to gain from the current state of affairs, however. We surveyed 1000 consumers in Great Britain, and the results are clear: 72% of households who already use Video On Demand (VOD) services are aware of the Disney+ launch, and, whilst only 13% of all those surveyed expressed interest in subscribing to the new service, interest is significantly higher in more engaged subgroups such as the 16-34 age bracket – 43% of whom are very or quite likely to subscribe.

“Exclusive content is a key driver for subscriptions across the board, and Disney is no exception. A third (33%) of those surveyed are interested in reliving Disney classics, while 24% are drawn in by the depth of children’s content on the platform, and Marvel films seal the deal for 26%. The recent partnership between Disney and Sky will no doubt play a key role in further boosting the appeal to consumers. But Disney’s success will also rest on the very positive perception of its brand and the service: 23% of those surveyed trust the Disney brand, rising to 28% of the 35+ age bracket; 24% of those surveyed also believed the service represented good value for money

“Positive brand perception and a good value exchange are both key to success. Whether content is ad-funded or fee-based, consumers want to feel like they’re getting good return on their investment. No matter how favourable the climate, it’s becoming increasingly challenging for new entrants to break into the streaming space. Actively monitoring what consumers think and want is key to getting the balance right. Now more than ever, marketers and content creators like Disney need to keep their finger on their customers’ pulse; accurate, holistic measurement across all platforms can ensure they make the very most of their brand voice and create content that is helpful, entertaining and worth paying for.”