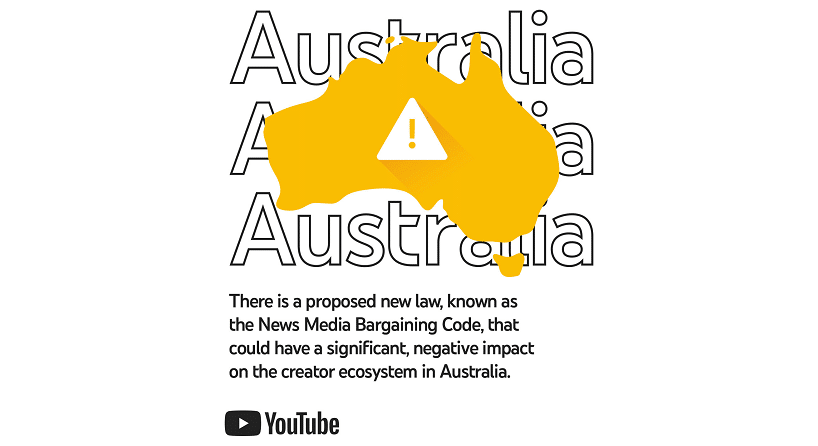 Google is opposing an Australian law forcing tech giants to pay local news outlets, warning it could threaten search services in the country.

In an open letter, the firm said that its YouTube and Search features could be “dramatically worse” if new rules were brought in. It also added that users’ data could be shared.

Over the past few months, the Australian government has been preparing legislation which will make Google and Facebook pay local publishers for their content.

Google has said it will fight the regulation which the government says is designed to create “a level playing field” for news outlets.

The YouTube you know and love is at risk in Australia. A proposed new law, The News Media Bargaining Code, could have a significant, negative impact on creators in Australia. Your voice matters.→ https://t.co/gR5Hf81DIH pic.twitter.com/oPnC6fi3If

The legislation also states that the companies would have to inform media organizations in advance if there are any changes made to algorithms that would significantly affect news rankings on their platforms.

The draft bill is in consultation period until Aug. 28. Sims said that the ACCC will continue to consult on the draft code with interested parties, including Google.

Melanie Silva, managing director and vice president of Google Australia and New Zealand said the law it “could lead to your data being handed over to big news businesses, and would put the free services you use at risk in Australia.”
Rod Sims, chair of the Australian Competition and Consumer Commission (ACCC), said Google’s letter contained “misinformation” about the draft media law.

“The draft code will allow Australian news businesses to negotiate for fair payment for their journalists’ work that is included on Google services. This will address a significant bargaining power imbalance between Australian news media businesses and Google and Facebook,” Sims said.

Responding to the ACCC’s comments, a Google spokesperson said that the company did not say the proposed law would require it to charge Australians for services like Search and YouTube, adding that it does not intend to charge users for its free services.
“What we did say is that Search and YouTube, both of which are free services, are at risk in Australia. That’s because the Code as it is drafted is unworkable,” the spokesperson said.

“For example, the Code requires us to give all news media businesses advance notice of algorithm changes and explain how they can minimise the effects. Even assuming Google could comply with this provision, it would seriously damage our products and user experience. It would impact our ability to continue to show users the most relevant useful results on Google Search and YouTube,” the spokesperson added in an emailed statement.

The company added in its statement that the code requires it to tell news media businesses what user data it collected, what data is supplied to them and how they can access the information that is not supplied to them. “This goes beyond the current level of data sharing between Google and news publishers,” Google said.

Google in its letter claimed that the law would force the company to give “unfair advantage” to Australian news media businesses over everyone else who has a website, YouTube channel or small business. The U.S. tech giant said it would allow those news outlets to “make enormous and unreasonable demands that would put our free services at risk.”

“News media businesses alone would be given information that would help them artificially inflate their ranking over everyone else, even when someone else provides a better result,” Silva said in the letter.

“We’ve always treated all website owners fairly when it comes to information we share about ranking. The proposed changes are not fair and they mean that Google Search results and YouTube will be worse for you,” she added.

Google further said it pays “millions of dollars” to Australian news media companies, sends “billions of free clicks” their way every year, and that it has “offered to pay more to license content.”