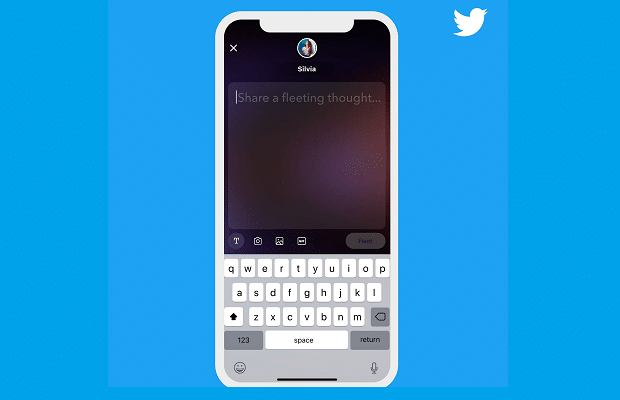 Twitter has begun testing “fleets,” tweets that self-destruct after 24 hours, a format first popularised by Snapchat’s Stories and later Instagram.

The new format, undergoing a test phase in Brazil, is designed for “fleeting thoughts,” which users may not want permanently nailed up as tweets.

Fleets will disappear 24 hours after they’re posted, and there’s no ability for others to retweet, like or publicly comment on them.

“One of the unique things about Twitter is that ‘what’s happening’ is fueled by people sharing their thoughts openly, through Tweets. But sharing your thoughts publicly can be intimidating!” Twitter product lead Kayvon Beykpour wrote in a post. “We’ve been listening to this feedback and working to create new capabilities that address some of the anxieties that hold people back from talking on Twitter.”

The company is launching fleets first in Brazil, “one of the countries where people talk the most on Twitter,” the company said. Twitter will evaluate the test-run of fleets in Brazil before deciding to take it elsewhere.

We’ve been listening to this feedback and working to create new capabilities that address some of the anxieties that hold people back from talking on Twitter. Today, in Brazil only, we’re starting a test (on Android and iOS) for one of those new capabilities. It’s called Fleets. pic.twitter.com/6MLs8irb0c

Twitter said it launched Fleets in response to a survey of users that showed they would be more comfortable “sharing everyday thoughts” if they disappear after 24 hours.
The social media giant therefore hopes that that self-deleting posts will lead to more engagement by encouraging people to share more often and to check their Twitter feed daily.

Like tweets, Twitter fleets are based primarily on text, but can include videos, GIFs or photos in them. Users’ fleets will appear at the top of their home page and visible to their followers. Other users can reply to a fleet via private direct message or with an emoji.

I know what you're thinking: “THIS SOUNDS A LOT LIKE STORIES!”. Yes, there are many similarities with the Stories format that will feel familiar to people. There are also a few intentional differences to make the experience more focused on sharing and seeing people’s thoughts. pic.twitter.com/OaGYZpChcN

Snapchat launched with the core feature of messages that delete after they’re viewed, and back in 2013 introduced Snapchat Stories that are viewable for 24 hours. Instagram launched a copycat in 2016 (a year after that Facebook itself did as well).

Privacy is not guaranteed however, as just like SnapChat, fleets can still be screen-captured by other users. But Twitter is still hoping that expiring content will minimize users’ fears that controversial or otherwise embarrassing old tweets will come back to haunt them.

Note that while Twitter lets users manually delete regular tweets, the text can remain accessible if those are “cached or cross-posted on third-party websites, applications, or search engines,” the company says.

The trial launch of fleets comes after Twitter last month acquired Chroma Labs, a startup founded by three ex-Facebook employees that developed an app for editing photos and videos posted to Snapchat Stories or Instagram Stories.

“Personalisation will be key to success”

Yuval Ben-Itzhak, CEO at Socialbakers, said: “While ‘Stories’ are nothing new in the social space, with Snapchat first launching Stories back in October 2013, Instagram following suit in August 2016, and TikTok being born into the Story format, it is a format that works extremely well on social media.

“For some time Twitter has been defining its niche to differentiate itself from other social media platforms. Now that it has firmly established itself as the place to be for breaking news and trending topics, it’s no surprise the platform is looking to implement new and exciting formats to keep users and advertisers engaged. Fleets may be just the ticket, as users who are also active on other social platforms like Instagram or Snapchat will already be comfortable with the format. Advertisers too, have taken to the Stories format. In an analysis of the top brands, we saw they were posting more to Stories than to the Instagram Feed, because the engagement rate is so good.

“By launching the ‘fleet’, Twitter is giving users another format with which to share their updates and to engage with others. Users are likely to enjoy the ephemeral nature of fleets as it will offer them a more casual, more transient way to share updates with their audience, as opposed to the more formal, lasting Tweets for which the platform is known.

“In order to maximise the potential of Fleets, Twitter will need to really focus on the prioritisation of which Fleets appear first to users. Many Twitter users follow hundreds of accounts, from friends and family to news media and celebrities. What’s going to be key is allowing users to configure which Fleets they see, by what they really care about. Personalisation will be the key to making the format a success for Twitter.”