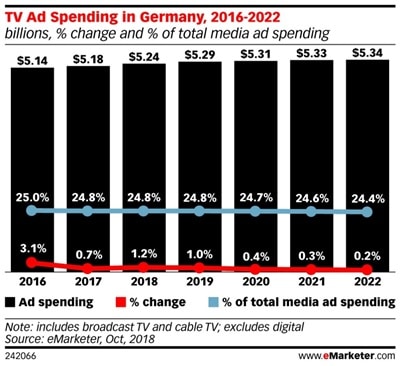 TV ad spending in Germany dropped below 25% of total media spending last year for the first time since 2015,while digital increased to 32%, according to new data.

TV’s share of total ad spending in Germany is shrinking largely because digital’s share is increasing. This year, digital ad spending will grow 5.5% to $6.74 billion (€5.96 billion).

Much of digital’s growth, not surprisingly, comes from mobile. This year, mobile will make up more than half (52.7%) of all digital ad spending in Germany, equating to $3.55 billion (€3.15 billion). Smartphone adoption is a key driver; it will reach two-thirds of the population this year, putting Germany on par with the US and UK.

“Several other factors are also driving mobile ad spending in Germany,” eMarketer principal analyst Karin von Abrams said. “For example, time spent on mobile devices is rising sharply, with the internet accounting for most of that time, as consumers keep up with news, monitor travel updates, shop, and check in to social networks. In addition, we’ve seen several key industries in Germany—notably retail and automotive—raise their investment in mobile ads in 2017, and we expect that to continue.”