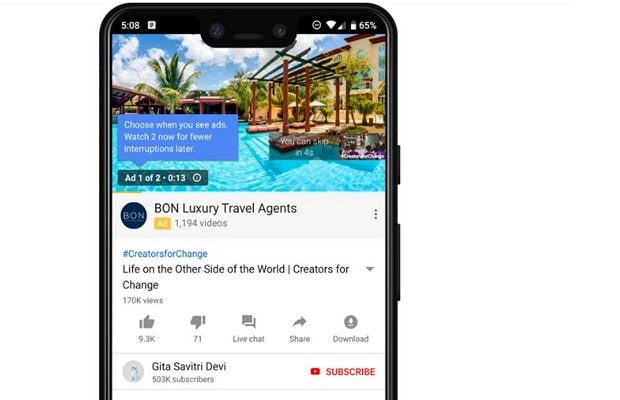 YouTube said that it is testing a format that stacks ads in order to cut down on the number of interruptions that occur for viewers. Through its research, the platform said, “we learned that fewer interruptions is correlated with better user metrics, including less abandonment of content and higher rates of ad viewing.”

Ad Pods can take several different forms, such as: two skippable ads, a skippable ad followed by a six-second unskippable spot (known as a Bumper Ad), a Bumper followeed by a skippable ad, or two consecutive Bumpers.

The new format will launch on desktop devices this year, and will subsequently roll out to mobile and TV screens.

YouTube will include notifications in the UI to indicate to users that by watching multiple ads at once, they will experience fewer ad breaks later on in their session

In early experiments, ad pods increased TrV Views our voluntary ad views by up to 10%, and reduced site abandon rates by 3-5%.

Ad pods are ad breaks designed for the YouTube’s digital audience, because they are relevant and offer users choice, while limiting the number of interruptions.

For viewers who do not want to watch multiple ads at once, they can still skip TrueView ads and go directly to their selected content.

That means if a user skips the first skippable ad in an ad pod, the second ad is not served and they go directly to their selected content.

This new experience accommodates viewer preferences while continuing to help creators monetize their content and advertisers connect with their most relevant audiences on YouTube.