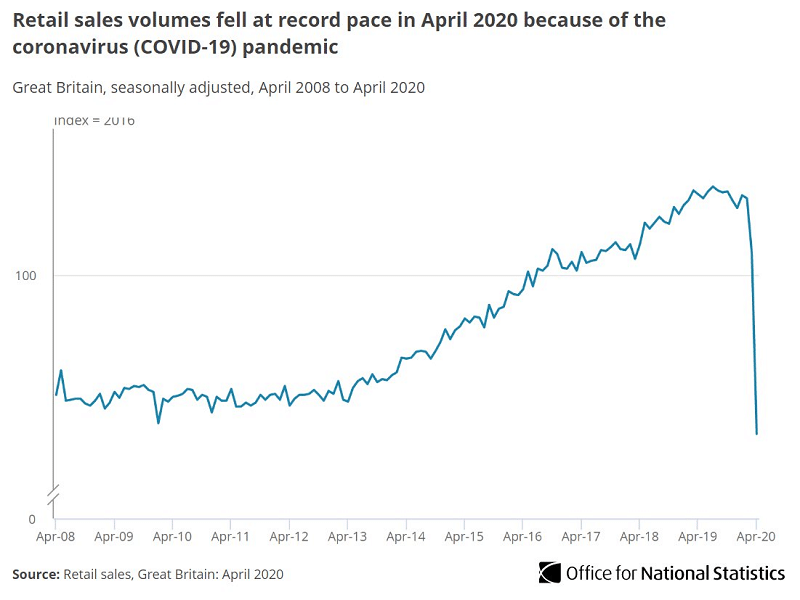 Ecommerce spending as a proportion of all retail sales reached a record high for the second month running in the UK in April, at 30.7%, as locked-down Brits shift their spend online.

The new figures from the ONS mark the first full month in which non-essential stores were closed as a result of lockdown measures, overall retail sales fell by a record 18.1%.

Total sales volumes in March dived 5.1% compared to February, as many stores shut their doors in the face of the coronavirus. On a year-on-year basis, sales volume declined 5.8%.

On a total sales value basis, March’s figures dropped 5.7% compared to February and 6% on a year-on-year basis.

Food stores reported their strongest growth on record in March, as sales jumped 10.4 per cent with shoppers stocking up on essential groceries.

Meanwhile the ONS said the total value of online food sales in March was more than double the same month last year, rising by 101%.

The analysis showed there was a considerable month-on-month growth in online spending across all categories listed by the ONS apart from textile, clothing and footwear stores, which fell by 14.5%.

The biggest increase was seen in food (55.8%), with UK supermarkets ramping up their online delivery capacity during this month in response to the crisis. This was followed by household goods stores (38.1%) as consumers adapted to staying indoors.

The overall proportion of online spending of 30.7% compared to the previous record set in March of 22.4%, when Covid-19 restrictions were first introduced.

The categories which saw the biggest proportion of online spending were household goods stores (55.5%) and textile, clothing and footwear stores (46.4%).

Total sales declined as increases in online sales failed to offset lower in-store sales, after non-essential stores were told to close their doors on March 23.

It said a record high of 22.3% of sales were made online as delivery operations continued.