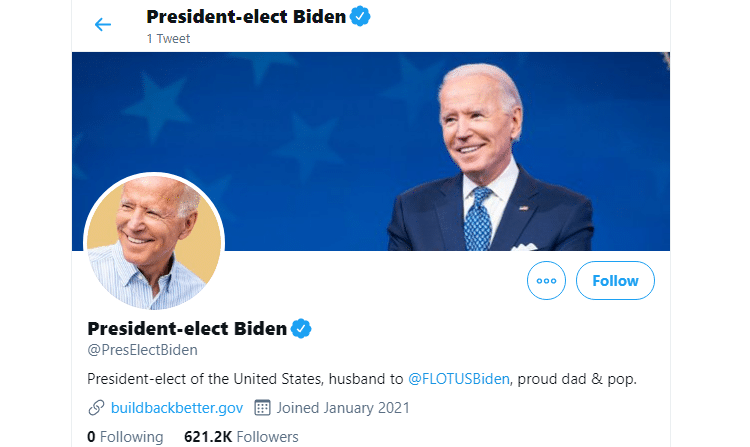 Joe Biden has launched a new Twitter account @PresElectBiden, after it was revealed the incoming US leader will not retain all the followers on the official @POTUS account.

It wasn’t immediately clear when Biden created the new verified account, although as of this writing it had a little more than 7,000 followers, suggesting it hadn’t been live for long.

“Folks — This will be the account for my official duties as President,” Biden wrote. “At 12:01 PM on January 20th, it will become @POTUS. Until then, I’ll be using @JoeBiden.”

The official presidential account @POTUS, which Biden will inherit on Jan. 20, currently has 33 million followers. But that number is likely to change as Biden won’t automatically inherit the followers of the previous administration when he officially takes control of the account on Inauguration Day.

Folks — This will be the account for my official duties as President. At 12:01 PM on January 20th, it will become @POTUS. Until then, I'll be using @JoeBiden. And while you're here, follow @FLOTUSBiden @SenKamalaHarris @SecondGentleman and @Transition46.

Rob Flaherty, the digital director for Biden’s presidential campaign, said in a tweet in December that Twitter told Biden’s transition team that “as of right now the Biden administration will have to start from zero” when the @POTUS and @WhiteHouse accounts are transferred.

Twitter company will also transfer the @WhiteHouse, @VP, @FLOTUS, @PressSec, @Cabinet, and @LaCasaBlanca to the Biden administration on Inauguration Day.