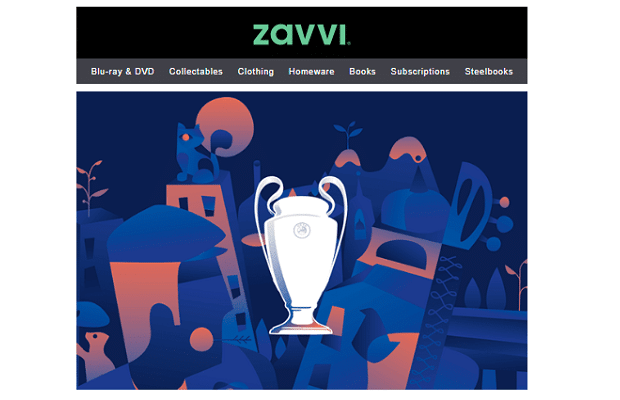 Online retailer Zavvi has received hundreds of complaints from contestants who were mistakenly told they had won VIP tickets to European football's biggest final.

Zavvi apologised on Twitter for the incident, putting it down to a “some technical issues”, but later deleted the tweet.

The email said each person had won flights, hotel stay at a 4* hotel, £250 to spend and tickets to the game.

One user commented that they had not even entered the competition but received the email congratulating them on winning.

People responded to the apology angrily, saying the mistake was “disheartening” and that the brand had “managed to upset all customers”.

This is going to be fun. Zavvi has just emailed its entire subscriber list telling them they’ve won VIP tickets to the Champions League final.

The final, seen as the biggest club game in Europe, is even more significant to UK football fans this year. Liverpool and Tottenham will meet in this season’s final after both pulling remarkable comebacks in their respective semi-final.

The final will be played on 1 June 2019, with the kick off at 8pm at the Wanda Metropolitano Stadium, home of Atletico Madrid.

Zavvi initially tweeted: “Apologies, we’re aware of the problem regarding the recent Mastercard Competition. We seem to have had some technical issues and we’re currently looking into this.” They later deleted this tweet.

The e-commerce site Zavvi launched the online contest in collaboration with Mastercard, offering “the chance to win a VIP trip for two adults to attend the UEFA Champions League FinalMadrid 2019”.

The tweet, posted on Thursday morning, has so far received 790 comments, many of whom are from disappointed “chosen winners”.

If you need cheering up today, search Zavvi on Twitter. They accidentally emailed their whole emailing list telling them they’d won 2 VIP tickets to the Champions League final. Scousers absolutely foaming at the mouth. A terrific surprise for us all 👏 pic.twitter.com/J7tqB1GNT3

The winner was due to receive the following “prize package” according to the competition’s website:

Tickets for the football final are worth as much as £7,020 per person, and economy return flights to Madrid around June 1 are currently priced at a minimum of £550 per person.

Liverpool and Tottenham will meet in this season’s Champions League final after pulling off two of the most remarkable comebacks in the competition’s history.

The final will be played on 1 June 2019, with the kick off at 8pm at the Wanda Metropolitano Stadium, home of Atletico Madrid.