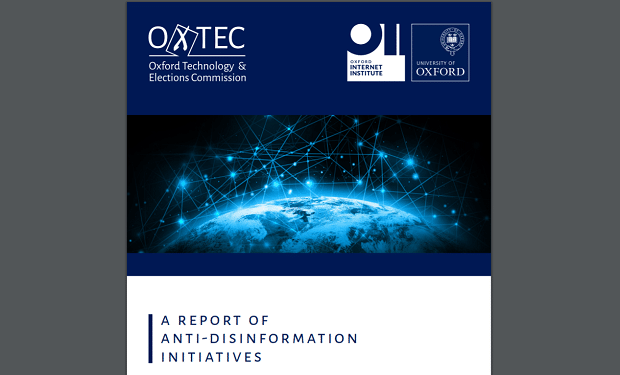 There are significant variations in the approaches taken by governments across the world to dealing with disinformation, often referred to as ‘fake news’ in popular verbatim, according to a new report.

A new report released today by the Oxford Technology and Elections Commission (OxTEC) has found governments around the world have used different approaches to tackle the spread of false information to influence politics and elections.

Entitled ‘A Report of Anti-Disinformation Initiatives’, the report produced by BBC Monitoring on behalf of the Commission, examines ‘fake news’ landscapes around the world and analyses a range of measures adopted by governments to combat disinformation.

The report highlights how governments are adopting different approaches with no clear single solution to curb the spread of disinformation, with considerable variations in the measures taken across different countries.

France and Germany have led the way amongst their European counterparts with France introducing legislation in 2018 to combat ‘fake news’ during election campaigns. Germany passed a hate speech law which came into force 1 January 2018. However Turkey is yet to pass any specific laws to tackle ‘fake news’. In Africa there is limited state intervention, but in countries where legislation is in place, such as Kenya, laws which punish the spread of false information lead to a prison sentence for offenders.

Professor Philip Howard, Director of the Oxford Internet Institute (OII) and Chair of the Commission, said: “Our analysis shows that many countries across the globe are increasingly aware of the threats posed by disinformation, but are struggling to find effective ways to curb its spread. Right now, there is no easy answer to the problems so many governments face in trying to curb the spread of disinformation through legislation without prompting criticism.

“We will be exploring alternative solutions to combat ‘fake news’ as well as looking at other technological influences and risks to the democratic process, releasing further reports looking at different aspects over the coming weeks, ahead of publishing our final recommendations in a full report in the autumn.”

The new report released today also highlights public concerns about the spread of ‘fake news’ across Europe, with the majority of Europeans (85%) describing fake news as a problem in their countries. A further eight out of ten (83%) said ‘fake news’ was a problem for democracy in general. Nearly half of Europeans people (45%) said journalists should be responsible for tackling the spread of fake news and over a third (39%) said national authorities should be responsible for combating the rise of ‘fake news’.

The OxTEC commission, founded by the OII, made up of academics, researchers, technology experts and policymakers, is set to explore further ways to combat ‘fake news’ as part of their wider ambition to explore how to safeguard democracy from the potentially disruptive influences of modern technology.

The Commission, founded by the OII, part of the University of Oxford, is due to release three further reports ahead of the final report, exploring the regulation of political advertising, the use of personal data in political campaigning and how social media enhances the spread of disinformation during elections.

It is also due to publish a full report in the autumn based on the key findings from all four main reports together with the latest work from the OII-led Computational Propaganda research project.

Judy King, Editorial Director at BBC Monitoring, said: “Our report clearly demonstrates that disinformation is a global problem that challenges the way we share information and perceive the world around us. A number of governments have adopted measures ranging from legislative and legal action to media literacy and public awareness campaigns to fight the spread of disinformation. However, there does not currently seem to be any “quick fix”.”

BBC Monitoring’s disinformation specialists, working with our journalists immersed in media environments around the world, are constantly tracking new forms of disinformation and ways to combat it.”

Today’s report builds on the launch of the new Commission earlier this year, when it set out its development goals highlighting its’ mission, aims and objectives for addressing technological threats to democracy.