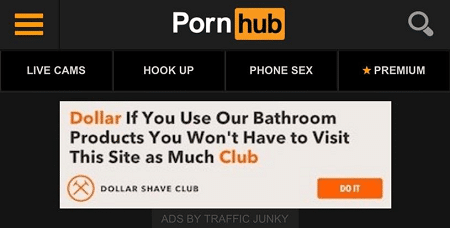 Unilever, which makes Dove soap, Marmite and Hellmann’s mayonnaise, ran a campaign for its grooming company Dollar Shave Club, which sends members razors in the post, with one of the ads reading “If you use our bathroom products you won’t have to visit this site as much.”

The consumer goods giant said that it had been unaware of Dollar Shave Club’s campaign, and that the shaving brand had “operational independence” over its marketing activities.

It took over the website’s homepage for a one-day #FoodPorn campaign to promote Devour, its frozen food brand, in January.

A Kraft Heinz spokesman said: “The brand was explicitly talking about #Foodporn, which has become a cultural phenomenon on Instagram.”