The price of slow tech roll-outs: Staff held back by legacy technology 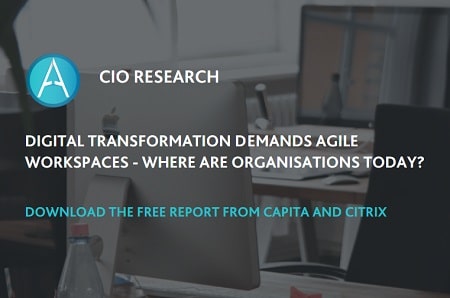 Organisations’ fears that inability to deliver an agile workspace will have a significant impact on their business competitiveness and ability to attract and retain staff, according to new research.

The research, from Capita and Citrix, shows that the overwhelming majority of organisations (93%) say younger employees are driving demand for more flexible technology and ways of working. Furthermore, 91% believed the IT user experience was important in attracting and retaining new talent.

However, CIOs revealed the biggest barriers to creating workplace agility are cost (48%), security and compliance concerns (47%) and legacy technology (44%).

Other key findings from the survey of 200 CIOs and senior IT decision makers, conducted by Vanson Bourne, include:

The overwhelming majority (93%) of organisations say that younger employees are driving demand for more flexible technology and ways of working. Furthermore, 91% believed the IT user experience was important in attracting and retaining new talent, with 55% of mid-size organisations stating it was ‘very important’ – underlining the value of retaining talented employees for smaller enterprises. However, despite demand from employees, 88% of organisations also admitted that dated capex budgeting models were making it more difficult for them to create agile workspaces.

“The digital revolution has had a substantial impact on how we work and what our expectations of our working environments are. As organisations look to move away from a traditional desktop IT environment to a more flexible one that caters for mobile, remote, and more digital-savvy employees, the appeal of an agile workspace has grown,” said James Bunce, Director, Capita IT Services. “The nirvana for many organisations is creating an agile workspace that puts users first – giving them everything they need, to work productively, in one single place – from applications, to shared data and documents, to self-service support. However, stitching these facets together is not an easy task, particularly as IT environments have grown in complexity. As the research shows, an agile workspace is not just a luxury for organisations but is fundamental to their success and ability to compete.”

As organisations look to create a more user-centric workspace, increasing numbers are turning toward a ‘Bring Your Own Device’ (BYOD) approach:

Is help at hand?

A key factor in user-centricity is assessing how employees feel about their working environment. The research reveals that more than three-quarters (79%) of organisations are currently measuring the IT user experience. On average, organisations measure the IT user experience six times a year, but more than a quarter (28%) say they are only monitoring it once or twice a year.

In recent years, the ability to ‘self-serve’ has played a central role in improving the user experience, and IT support is no exception.

However, the survey reveals there is still work to be done in ensuring that self-service technology upgrades the user experience, as the majority of organisations (83%) say they still typically find out about users’ experience of IT through calls to the helpdesk.

“The findings show that while many organisations have adopted BYOD the full benefits are yet to be realised, as security and support concerns remain. A reluctance to give staff access to their preferred technologies holds back enterprises from becoming truly user-centric, therefore organisations must seek out solutions the enable BYOD in a secure manner while minimising the support burden,” added Bunce. “A truly agile workspace should allow IT teams to continually monitor user experience, yet for many it remains a reactive rather than a proactive function, with the onus on users to report issues. Without tools in place to monitor environments in real-time and enable IT teams to rectify issues more quickly, organisations risk creating a dispersed workforce of unhappy employees.”

From a technology perspective, the majority of organisations (87%) say legacy applications are slowing their journey to creating an agile workspace, with the cost of re-architecting or transforming applications (68%), disruption to the user experience (43%), and a lack of in-house skills to modernise applications (36%) cited as the main causes.

Evolving alongside this application challenge has been the shift towards cloud computing, with organisations looking to Software-as-a-Service (SaaS) applications to increase workspace agility. Yet only a quarter (25%) of organisations think SaaS applications meet their requirements, with this figure dropping to 17% in mid-size organisations.

“An agile workspace is one in which employees can access all the applications and data they need, empowering them to collaborate with colleagues over any connection. This is easier said than done for most organisations because migrating from legacy remains a challenge,” said Justin Sutton-Parker, Director, Partners, Northern Europe at Citrix. “Ultimately, businesses are looking for cost-conscious, scalable and flexible solutions to enable productivity and deliver efficiency, often combined with a cloud-first approach – to help tackle legacy issues and embrace the digital workspace.”

Commenting on the findings Professor João Baptista, Director of MSc Business Consulting at Warwick Business School, said: “The digital revolution in organisations has mostly been visible in words and intentions, very few studies have captured the real effects on the ground and the challenges faced by those pushing these ideas into practice from within organisations. This report by Capita and Citrix is a useful examination of where organisations are today on this journey and a good diagnosis of the real challenges hindering progression. Some of these challenges such as costs and the weight of legacy systems and processes are more intuitive but what the report also highlights is the lack of focus on employees to create a user-centric platform of work, one that responds to new practices and patterns of work in modern organisations today. The report provides useful ideas for moving forward towards a more employee-centric organisation.”