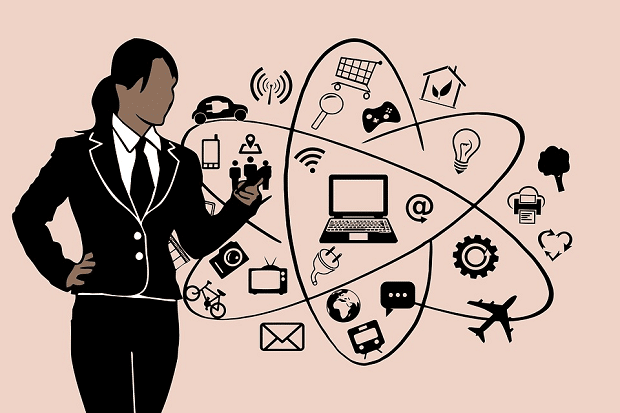 Portugal, The United States and Latvia offer the best opportunities for women in tech, with an industry gender pay gap around 6-7% less than the overall average wage gap in each country, according to new research.

With gender disparity a topic at the forefront of modern discourse, leading technology career platform Honeypot, has released the 2018 Women in Tech Index.

The results offer a view on gender-based employment inequalities both at large and in the technology sector. In an effort to position themselves as industry experts, the developer-focused career platform decided to research the role that gender parity plays in the technology landscape by comparing the proportion of female employees, gender wage gap and opportunities for women in the IT field, among other criteria. In sharing the results of this study, Honeypot aims to highlight which countries offer the best opportunities for women in tech and to encourage the industry at large to take further positive steps towards gender parity.

The study focuses on 41 countries in the OECD and EU, and offers comparable data relating to both the tech industry and the wage gap. The data covers areas such as:

Finally, to bring attention to any potential barriers which might hinder a woman’s progression in the tech industry and to highlight the best opportunities for women, the Gender Inequality Index was analysed. This reviews women’s reproductive health, empowerment and labor market participation to conclude overall parity. To determine if equality has increased or decreased in recent history, we then calculated the difference between the current available wage gap data, as compared to five years previous.

“Gender parity in the workplace is not just an ethical or moral issue, but also an economic one: McKinsey found that $12 trillion could be added to global GDP by 2025 by advancing women’s equality. As tech recruitment specialists, we are often confronted with the gender imbalances of the industry, which are fully exposed in this study.” says Emma Tracey, Co-Founder at Honeypot. “The results reveal the countries which have the most to offer women looking to progress in the tech industry, with Portugal, The United States and Latvia highlighted as the top three nations that have taken positive steps towards gender parity in the technology field in terms of fairer wages. However, with the proportion of female tech workers remaining under 30% across the board, we hope that this study will enrich the conversation concerning equality in this industry and inspire more women to seek out opportunities in tech.”

Revealed below is a sample of the results for The United Kingdom:

Revealed below is a sample of the results from the top 20 countries offering the best opportunities for women in tech, calculated by comparing the difference between the overall gender pay gap and the pay gap in the technology industry. A positive number demonstrates that the income disparity in tech is less than the overall average in that country, indicating that female tech workers have been afforded fairer wages. E.G. the % Difference of Overall and Tech Gender Pay Gap in Portugal is 7.26%, which indicates that the Portuguese tech pay gap is 7.26% better than the overall wage gap. A negative number, for example in Ireland at -3.13% indicates that women in tech are 3.13% worse off salary-wise than in the average profession.

Comparison of Gender Pay Gap from 2010 to 2015: indicates the percentage that the gender wage disparity has increased or decreased in the past 5 years, (as most current available data is from 2015). A positive number, for example in France, indicates that the way gap has increased by 3.44%. A negative number, for example in Iceland, indicates that wage disparity has improved by 2.29%. For a further breakdown of each criteria, please see the methodology at the bottom of the press release. 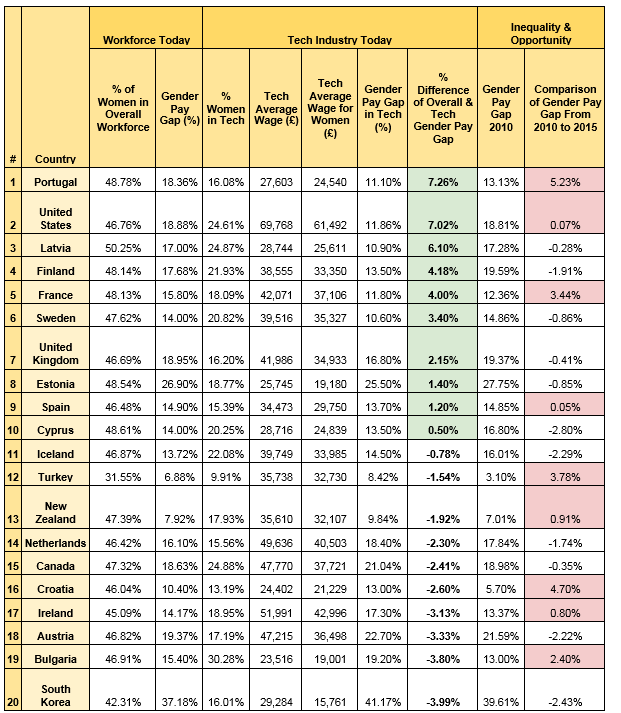 This is a sample of the full results, which can be viewed here:

“That this index shows the gender pay gap actually increased in 17 countries over five years may come as a surprise to many.” says Emma Tracey, Co-Founder at Honeypot. “It is encouraging however, that some countries such as Finland, Sweden and The United Kingdom are making positive strides towards parity both in the tech industry and in general, and their example ought to act as a catalyst for the remaining OECD and EU nations to address their wage disparities.”

“This study has revealed some fascinating cultural case studies. Take Turkey, which has the lowest gender pay gap for tech jobs in the index, and the 5th lowest overall gender wage gap. Yet, they also have the lowest percentage of women in employment, with only 31.55% of the country’s workforce made up of women.” says Emma Tracey, Co-Founder at Honeypot. “This would suggest that although there are cultural barriers working against women in Turkey, those that do work are paid more fairly for their contributions than many countries which consider themselves to be more equal such as Germany and The United Kingdom.”
“One of the most surprising outcomes of this study was that Israel, the so-called ‘Start-Up Nation’ with its ‘Silicon Wadi’, has only 26,000 women working in tech, accounting for only 11% of its IT industry—one of the lowest in the index.” says Emma Tracey, Co-Founder at Honeypot. “With a technology gender wage gap of over 27%, it could be surmised that Israeli women are discouraged from joining the tech workforce when there is better pay to be found elsewhere. We hope that by bringing attention to this disparity, this study can act as a catalyst for change to help the some 24% of female STEM graduates in Israel battling against this inequality.”

“The World Economic Forum reported in 2017 that economic gender equality will not be reached for another 170 years, but that equality for women in the labour force would add $28 trillion to the global economy by 2025.” comments Emma Tracey, Co-Founder at Honeypot. “Consider too that the technology industry is likely to form the core economic platform in the future, and it’s clear how desperately we need to address the issue of gender inequality in the IT field. We hope that this index helps to open the eyes of those at the top of the industry and galvanize them into making positive changes, not only for the sake of parity, but for the entire global economy.”