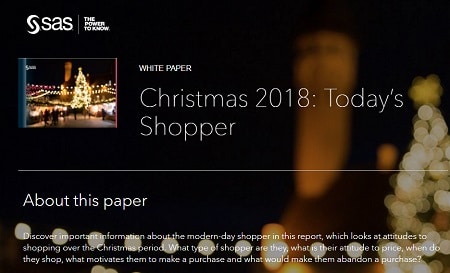 Shoppers will heap further pressure on retailers this Christmas, as they are more price-sensitive than a year ago and more inclined to spend time researching the best deals.

Nearly half (46 per cent) are more price-sensitive this year, with just 12 per cent less so. They are more organised and use multiple channels to find what they want, with many prepared to over-order and then return unwanted items.

However, despite the continuing political and economic uncertainty adding to retailers’ woes, there are opportunities to be had this festive season. According to a report Christmas 2018: Today’s Shopper by analytics leader SAS, consumers are generally more optimistic about their spending, with 23 per cent saying they will spend slightly more on gifts than the previous year compared to 15 per cent who say it will be slightly less. Not only that, but 10 per cent are planning to spend significantly more this time round.

New tribes of shopper have emerged

When asked about their shopping behaviour, a quarter of consumers (26 per cent) describe themselves as an ‘organised shopper’. They know exactly what they want and plan purchases in advance. ‘Thoughtful shoppers’ comprise 19 per cent and take advice from others and think carefully about their purchases. A similar percentage (20 per cent) describe themselves as a ‘promiscuous shopper’, curious and eager to hunt for the best deals with little brand loyalty.

These three groups make up nearly two-thirds (65 per cent) of all shoppers meaning a clear majority think carefully about what they need to buy and are prepared to spend time finding the best deal. Last year only half (51 per cent) fell into one of these three categories, suggesting this year’s more price conscious shoppers are prepared to put even more time into researching their purchases.

Most challenging for retailers, however, is that price can no longer be relied upon as the most appealing factor when making a purchase. Almost a quarter (22 per cent) of customers see discounts as the primary motivator of their purchase decisions, but 11 per cent prefer convenience to price. Free delivery (19 per cent) and flash sales online (13 per cent) are other powerful motivators, but consumers can also be swayed by email promotions, stock shortages or overall customer experience.

With such a diversity of motivating factors, it is difficult for retailers to cater for all wishes simultaneously without detailed insight into every customer down to a segment of one. They must put more emphasis on other factors, besides price, to target customers based on individual needs and preferences.

However, it would seem that retailers are falling short in delivering effective, personalised offers as consumers do not seem particularly motivated by automated online recommendations even where these are suited to their preferences. Only one in five (20 per cent) say it would increase their likelihood to make a purchase, while most are unaffected by them and 15 per cent even say such recommendations would make it less likely they would make a purchase.

Shoppers are often researching items online before buying them in-store, with Amazon and Google the most popular places to look when consumers are researching Christmas gifts. Together, they attract nearly half (45 per cent) of shoppers, compared to a third (32 per cent) preferring to look in-store for gift ideas, and only 12 per cent going direct to the retailer .

Despite fears over the death of the High Street, nearly half (47 per cent) of consumers typically make their final Christmas gift purchase in-store, compared to 32 per cent who prefer to buy from Amazon or Google. Physical stores are the preferred places for making a purchase of apparel (49 per cent), Christmas decorations (62 per cent), food and drink (73 per cent) and home furnishings (49 per cent).

Amazon and Google are nevertheless prominent in buying decisions not just in terms of researching items, but often buying certain items too. More than 60 per cent of all consumers first look for books and music items on either Amazon or Google, and more than half (55 per cent) make their final purchase there too.

While brands need to understand the full potential of partnering with online retailers like Amazon to maximise their brand exposure, they have to balance this against paying commission for them to be the shop window for their products (e.g. in costs per click), which puts a squeeze on profit margins.

Retailers also face high volumes of returned items, which can be costly to handle and adds further complexity when it comes to predicting appropriate stock levels. One in five (20 per cent) of shoppers say they would at least occasionally buy items knowing they will return them, while eight per cent admit to being serial returners that would regularly purchase a range of items with the intention of returning a third or more of these items.

Andrew Fowkes, Head of Retail Centre of Excellence at SAS UK & Ireland, commented: “Christmas will be a crunch time for retailers this year. Against a backdrop of continuing economic uncertainty, business must go on as brands compete for the attention of today’s more discerning shoppers. As well as being more price conscious, they are more sophisticated in how they shop, researching the best deals and taking into account other factors such as free delivery, convenience and overall customer experience.

“Retailers need to use data to enable them to make smarter decisions in this complex and highly competitive environment. The ability to extract insights from a mix of data sources using analytics can help retailers understand what their customers’ habits and preferences are, as well as the demand for particular products at any one time. The ability to target customers with highly personalised offers at the right price, over the right channel and at the right time is key to delivering ‘harder-to-win’ sales revenue this year.”

Other findings from the report include:

The online survey was conducted by 3GEM between 20 and 28 November 2018 to gain insight into shopping habits at Christmas. The survey was completed by a representative sample of 2,000 Christmas shoppers in the UK and Republic of Ireland aged over 18.