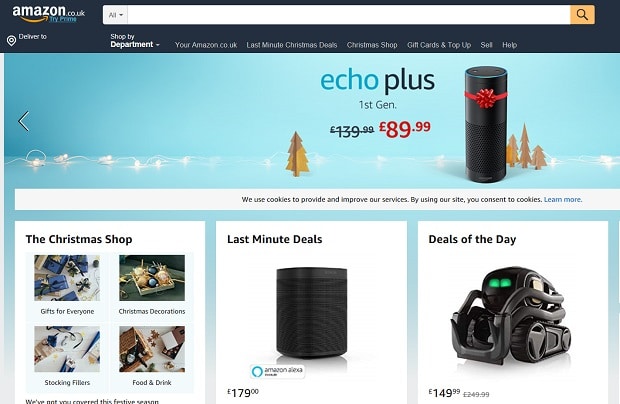 Amazon has become its very own search engine, seeing a 24% increase in people beginning their browsing on the ecommerce giant’s website resulting in better conversion rates and more exclusive buyers than the industry standard, according to new research.

The data from Hitwise indicates that Amazon’s ability to bypass the likes of Google and Bing has seen the company increase its share of retail to over a quarter.

According to Hitwise, the industry saw a 3% decline in web visits during Black Friday compared to last year. But visits to Amazon, grew 3% to reach 49.98 million – over a quarter of the entire industry. Amazon also processed a staggering 4.22 million transactions on Black Friday, a rise of 9% year-on-year.

Searches starting on Amazon were key to this rise, with the volume of search sessions increasing by 24% on Black Friday. This indicates that less people typed a product search into Google or Bing, and then found their way onto Amazon. They started there. And they stayed there.

This data shows that more shoppers are changing traditional ways of browsing. With so much choice and so many offers available to consumers, Amazon’s ability to attract buyers directly onto its site is crucial to the retailer’s growth; its market share; and changing the habits of shoppers at the checkout.

Over the two weeks leading up to and including Black Friday, Amazon saw a total of 3.48 million exclusive buyers on its site, and Hitwise found there were 1.26 million individual buyers on Black Friday alone. That means consumers did not purchase on the other top seven retailers – not eBay nor John Lewis, for instance. Compare this figure to 2017, and it’s up by 4%.

“Online retail has slowed down, but Amazon is still finding ways to grow”, says Lisa Luu, Global Head of Insights at Hitwise. “Hitwise data shows that the ecommerce giant has now become its own search engine. It is getting more effective at keeping people on the site, and converting them at double the industry average. Amazon is taking more share of the consumer’s online journey, and we are seeing brands react to this. More spend and efforts are now being dedicated to Amazon, optimising how a brand’s products are getting featured by the ecommerce giant.”