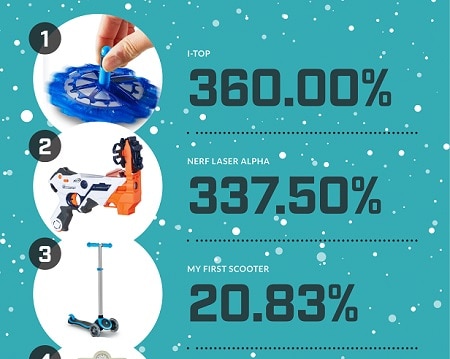 A new study from digital marketing and technology agency, Everest Media, reveals how online demand for this year’s must-have Christmas toys surged by up to 760%, following the publication of the Argos and John Lewis top Christmas toys lists.

As part of the study, Everest Media analysed the volume of Google searches that each toy on the list received, during the three months before and three weeks after each list was published.

Argos published it’s Christmas toys list back in June – almost 200 shopping days before Christmas. From the 13 items featured on the list, the three toys that experienced the biggest increases in online demand were:

The John Lewis list was published in September, with the three most popular toys being:

The publication of both lists clearly resulted in a major boost in online demand for many of the products featured. This is because shoppers are increasingly searching for list-based content when researching potential Christmas present purchases.

For example, the volume of searches for the term ‘top Xmas toys’ begins to increase from June and peak massively the closer we get to Christmas. In addition, search terms like ‘best Christmas toys’ and ‘top toys Christmas’ have also been increasing significantly year on year, as our online shopping behaviour evolves to reflect the popularity of ‘must-have’ Xmas product lists.

As a result, many canny retailers have now tuned into this trend, which is why brands as diverse as Costa, Boots, Very and Mothercare have now followed in the footsteps of Argos and John Lewis and produced their own lists.

Samuele Armondi, CEO, Everest Media, said: “The study illustrates just how important it is for retailers to closely monitor the latest trend data to enable them to align their content strategies to ensure they are in the running for the most popular searches.

“This is especially important in the run-up to the critical Christmas sales period, which is why big retailers are increasingly developing must-have Xmas lists to help supercharge their festive SEO strategies.”

To see the full study and trend data visit https://www.everest-media.co.uk/news/christmas-seo-insight-report/

View the lists below: