While online conversions increased 11% since the beginning of June, website revenues dipped by 7% since the start of the month, according to new data. 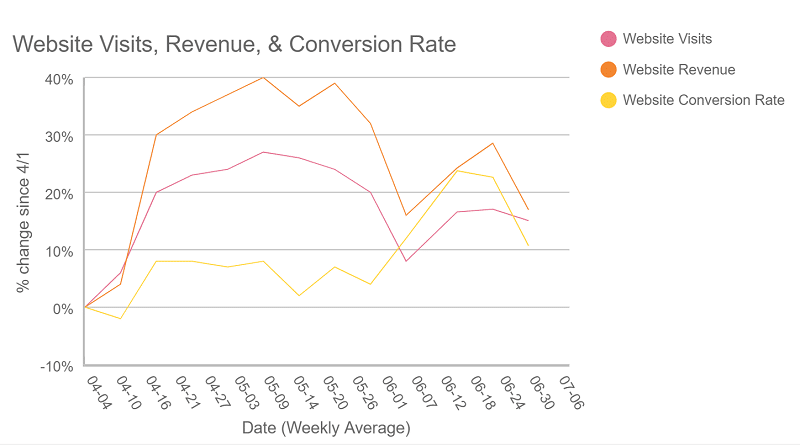 The research, from the Marketing Pulse report by BounceX, soon to be Wunderkind, reveals that while UK online revenues dipped slightly since the levels seen at the beginning of the month, down 7 percentage points, eCommerce sales remained buoyed, up 29% since the beginning of April.

And despite non-essential bricks-and-mortar shops reopening on 15 June, the impact on eCommerce remained limited as nervous post-lockdown shoppers continued to favour buying online, rather than heading into store.

At the end of the first week of the High Street reopening (week ending 21 June), shopper traffic rose 19% on the previous week, according to the BRC-ShopperTrak Footfall Monitor, but footfall still remained at record lows, down 57% year-on-year. Meanwhile, BounceX’s data showed that online revenues grew 5% week-on-week during the same period (w/c 15 June vs w/c 22 June).

Rob Delijani, Senior Director of Growth Strategy at BounceX EMEA, commented: “eCommerce has stabilised and overall across website visits, revenues and conversion rates, we see that these are all trending about 10-15% higher than pre-COVID-19. Yet, at the same time, we’ve seen extensive discounting strategies by retailers continue in June. While there’s been reports of pent-up demand, with Brits holding back an estimated £60bn of spend during lockdown*, online performance remains high, suggesting there might not be a need for the levels of discounting we’ve seen.”

“It’s important to remember that not every shopper needs a discount to convert. Rather than offering a promotion or offer code as soon as a customer lands on the site, by identifying shoppers and understanding their buying intent, retailers can personalise ecommerce shopping journeys which drive conversions while maintaining margins.”

“At a time when online performance is high, instead of chasing a race to the bottom through discounting, we suggest retailers’ efforts focus on community engagement through content creation and optimising email and other owned channels to drive performance,” he concluded.