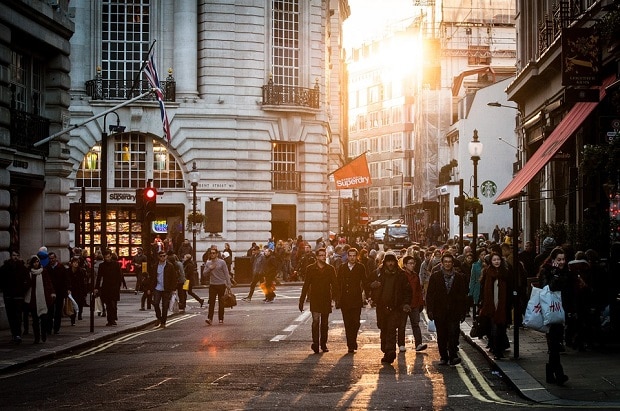 The British Retail Consortium (BRC) found that UK shoppers cut back on spending in late 2019, rounding off the worst year since at least the mid-1990s for retail sales,
Total retail spending fell by an annual 0.9 percent in November and December combined, lumping the two months together to smooth out volatility caused by changes in the dates of Black Friday between 2018 and 2019.

The BRC’s figures do not include the entire retail market. For instance, its survey excludes some fast-growing online retailers, including Amazon, which some experts reckon now account for some 20% of online sales.

BRC chief executive Helen Dickinson said last year was the first since the group began its records in 1995 to show a full-year fall in sales – down by 0.1 percent – as two missed Brexit deadlines and the election weighed on consumer confidence.

“Looking forward, the public’s confidence in Britain’s trade negotiations will have a big impact on spending over the coming year,” Dickinson said.
Johnson has said he will negotiate a new trade deal with the European Union before the end of this year and avoid the economic hit of tariffs and other trade barriers when a no-change transition period ends on December 31.

The BRC said like-for-like sales – which strip out changes in retail floor space from one year to the next – fell by an annual 1.2 percent in the combined November-December period.
Payment card company Barclaycard also sounded downbeat about broader consumer spending which has helped the UK’s economy to cope with the hit from lower investment by businesses since the Brexit referendum result of 2016.

Barclaycard said spending rose by an annual 1 percent in December – lower than the growth of approximately 1.5 percent in the autumn – with supermarkets showing a fall of 0.9 percent.
But cinema sales were up 19 percent, helped by the release of the latest Star Wars and Frozen films. Spending in pubs and on takeaway food rose by about 12 percent.

The findings chime with reports from retailers and data providers which have suggested major supermarkets and bricks and mortar stores struggled to make much headway following a tough few years.

Neil Devlin, UK Head of Retail at Acxiom, said: “While these figures are concerning it doesn’t mean the gig is up for high street retailers. With consumers being ever more cautious about where they spend their money, and shopping habits indicating a shift towards convenience above all else, the opportunity lies in retailers being able to look beyond the products on the shelves. Shopping in the next decade will be defined by the experiences retailers are able to offer their customers. Retailers should consider the value-add services they can provide which surprise and delight, and a sure way to do that is by joining the dots across a customer’s interactions both online and instore to form a single plane view of the customer. Using data in this way, retailers can recommend relevant products, offer discounts at the right moments and ensure every interaction satisfies that craving for convenience.”

Hugh Fletcher, Global Head of Consultancy and Innovation, Wunderman Thompson Commerce, said: “Retailers will be disappointed to see 2020 immediately marred by the first annual sales decline in 25 years. The current political instability is not conducive to confidence, but it’s possible that this year’s retail figures have been adversely affected by the uncertainty around domestic politics in the UK and Brexit. Shopping trends are also clearly shifting and UK consumers are increasingly shunning the high-street in favour of online platforms, which offer the immediacy expected; 48% of UK consumers intend to increase their use of digital shopping channels. And with shoppers’ purse strings tightening, ecommerce channels are one avenue to keep consumer confidence high and reverse the trend of unwanted balance sheets.

“Retailers are also struggling thanks to the market dominance of Amazon and its ability to provide customers with what they want, when they want it. Yet, Amazon can be an incredibly useful platform for brand recognition, with 72% of commerce leaders admitting they need to invest more money in the company. Meanwhile, the popularity of online shopping means retailers must now find the right balance between their in-store offering and having a strong online presence. As shopping habits evolve, retailers must embrace the need for immediacy and feed consumers’ desire for convenient online shopping or face the dark prospect of another year of poor sales, profit slumps and sluggish growth.

“Looking at the bigger picture, as marketplaces take a larger proportion of shoppers’ spend, money exiting the retail industry to overseas competitors will hurt the growth of UK retail. A key area the government should focus on is how the UK can be protected against the growing influence of Amazon on total retail spend, and the imminent entry of Alibaba into Western markets.”

Michael Schirrmacher, MD at Bloomreach commented: “The latest retail figures released today, emphasise the mounting challenges retailers are facing on our high street. Consumer confidence in brick and mortar stores are falling and in order to succeed retailers need a strong strategy in place where both online and physical retail complement one another. Physical stores can no longer be thought of as separate entities, but instead need to provide customers with an experience that is consistent with the brand’s online presence. This means redefining physical stores as a marketing expense and treating them as an extension of online and an opportunity for people to experience how a product makes them feel. This in turn, will amplify engagement and interaction through other channels such as mobile and desktop.”

Jon Buss, MD of UK and Northern Europe at Yext: “The sales results we’re seeing following Christmas make it clear just how competitive and driven the seasonal market is, and how important it now is that retailers ensure they attract consumers in a useful and timely manner. With footfall and sales down, it’s no longer enough to assume that the store or brand experience alone can drive customers in-store. Modern consumers often begin their journey online, and having the correct information, whether that’s stock availability, answers to FAQ, hours of operation or even an address or phone number, is crucial to ensuring that a simple online search translates into an in-store experience.

“What’s more, our recent data shows that consumers are becoming more open to trying new experiences outside of the traditional high street. Increasingly, consumers are asking questions online about the best places to shop in and visit, which is having a direct impact on footfall on the UK high street, with niche locations proving more popular than town centre shopping. Not only do consumers want this information in real-time, but they want the right answers too – and for high-street retailers to improve their peak results in 2020, this may indeed start with making sure they are ready to deliver these answers on their websites and on the major platforms like Google, mapping apps, social sites and voice search. Failure to adapt to this fast changing consumer search behaviour may well lead to more seasonal sales disappointments.”

Paul Kirkland, Director of Retail & Hospitality at Fujitsu UK, added: “It shouldn’t come as a surprise to retailers that total sales fell in 2019; from declining footfall as online competitors grow their market share, to the continued impact of the UK’s political and economic uncertainty, it was a particularly difficult consumer environment to navigate. But in the face of changing consumer habits and expectations, retailers have struggled to innovate and keep pace with the rapid transformation we’re seeing across the sector. We’ve seen this lead to the closure and administration of many high-street brands as a result. It’s time for the entire industry to dramatically rethink how we can revive the high-street and drive future revenue and growth.

“In fact, our recent research found that 40 per cent of UK customers feel that the high-street has been too slow in adopting technologies, showing just how much room for growth there is for retailers to take advantage of new digital solutions. For example, by leveraging predictive analytics to build a responsive and speedy delivery network to using augmented and virtual reality to immerse people in an engaging experience.

“Thanks to the increasing levels of competition, and the ever-growing ways consumers can shop across devices, channels and touch points, it’s now much harder to drive awareness and attract people to shop in-store. While 2020 looks set to present continued challenges for retailers in the UK, they have the opportunity to focus on using technology to match the immediacy, personalisation and ease of online shopping to reinvigorate the in-store experience and inspire people to return to the high street.”