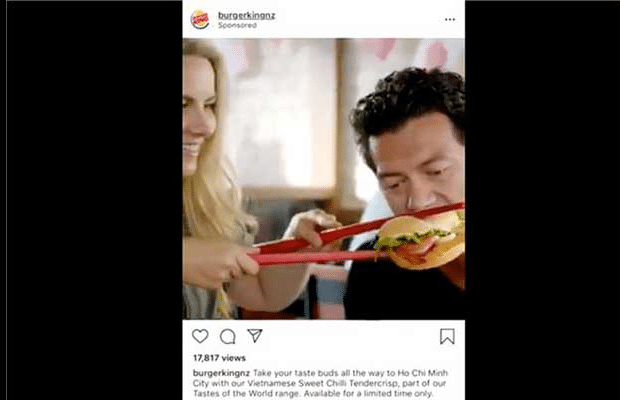 Fast food chain Burger King has been forced to remove an advert in New Zealand after it was branded 'racist'.

The advert is for a new Vietnamese burger depicted a westerner struggling to eat a burger with chopsticks, the latest western brand to be accused of mocking Asian food customs.

The advert, which appeared to feature no one Vietnamese, was captioned: “Take your taste buds all the way to Ho Chi Minh City.”

In response, a version posted to Twitter by Maria Mo, a Korean woman living in New Zealand, has been viewed more than 2.9M times. Mo attacked the ad, describing it as “racist”.

In her post, Mo wrote: “I’m so sick of racism of any kind. Of the kind that makes fun of different cultures. Say no to every single manifestation of it.”

Who the hell came up with this? There are a lot of Asian people in NZ, though they probably aren’t getting their Vietnamese food from Burger King 🤢 https://t.co/XSGYX7IVBR

The fast food chain has since apologised for the ad and removed it.

Burger King stated it the ad was “insensitive and does not reflect our brand values regarding diversity and inclusion. We have asked our franchisee in New Zealand to remove the ad immediately.”