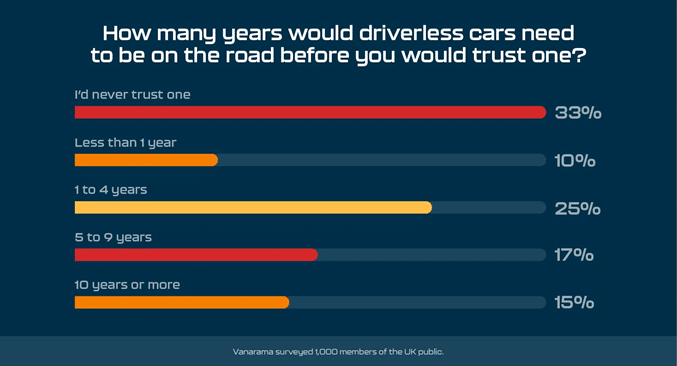 Driverless cars could be on the road as early as this year, according to a consultation launched by the British Government in 2020, and Apple have revealed they are planning to release a driverless car in 2024. But a new survey reveals a sceptical public still need to be won over.

The question is, is the public ready to trust driverless cars? Vanarama surveyed 1,000 members of the British public to find out.

Despite the promise of the technology to be able to think faster than their human occupants and spot possible danger within a microsecond, motorists still aren’t sold.

A surprising 79% of people believe that they would be able to respond to danger quicker than the car.

77% of Brits, however, did admit that they would eventually trust a driverless car, depending on how long they have been on the roads, but with more than 50% of them not trusting driverless cars to go over 30mph, we certainly won’t be getting anywhere fast!

You can find their full findings on the blog