Just 5% of gamers intend to purchase a VR headset this year, but many accept ‘pay to win’ micropayment models as the norm, according to a new report.

While less than a third (31%) of the 1,663 avid gamers who participated feel games are becoming more innovative, 71% still believe that gaming represents value for money.

The report also dissects gamers’ strong opinions on microtransactions and finds that while only 2% of gamers now eschew them in favour of a one-off, up-front payment, 22% emphatically dislike controversial ‘pay to win’ models (where players get to bypass hours of gameplay by paying to jump ahead) with some even calling this tactic “sickening” and “toxic”.

The report is based on an online discussion on Qutee led by a panel of respected gaming/tech data influencers. The curated Qutee debate explored gamers’ likes, dislikes, frustrations, and thoughts on the future of the industry, and resulted in a tidal wave of almost 2,000 in-depth comments across over 450 discussion topics, as well as 10,000+ poll responses.

“The Gaming Today debate shows that the industry is in the midst of a cultural shift while simultaneously experiencing growing pains. The pursuit of profit in some quarters has led to stagnation at best, and predatory tactics at worst. Gamers are watching and are at the centre of the interplay between passion and innovation meeting the bottom line. Fortunately, the market is so large it leaves room for fragmentation, where companies on both sides can successfully carve out a niche,” added Flint Barrow, co-founder and CTO of Qutee.

The death of gaming innovation?

37% of gamers argue that games are becoming less innovative, though some concede that it is difficult for long-established franchises to significantly change gameplay, with one gamer commenting: “In a series of games, with a set formula, what changes can be made?” Others argue that it is still possible to innovate, pointing to Creative Assembly’s successful Total War franchise: “For years they (Total War) were doing historical titles and suddenly they do a fantasy one, Total War: Warhammer. Warhammer in a way brought Total War back to life.”

Is the ‘pay to win’ backlash set to continue?

The debate echoed the barrage of recent negative sentiment around ‘pay to win’ microtransactions, with 22% disliking this tactic. One gamer said: “I understand the people who make the game need to make money too, but I do believe that there should be a minimisation of in-game purchases that give some people an unfair advantage.” That said, microtransactions in general are now considered the norm, with only 6% saying they do not make in-game payments, and 69% feeling that cosmetic transactions are acceptable.

71% of gamers feel that gaming still gives them value for money, compared to just 9% who don’t. Gamers still prefer to pay a larger amount up-front, and use microtransactions only where they enhance the experience, while many agree that price-point variety is a good thing: “Not every game needs to be $60 with 40 hours of content and four DLCs. As long as the content-to-price ratio is fair, games can be created to target any price point.”

Interestingly, just 5% of gamers intend to splash out on a VR headset in 2018, with the vast majority of gamers holding out for the double whammy of a killer app and a headset price cut. While gamers are undoubtedly excited and positive about VR gaming, this comment from one gamer perfectly sums up the thoughts of many: “VR is a very interesting tech but still too new and expensive for myself personally.”

Almost half (46%) of gamers now play for more than 20 hours a week, and 60% admit to watching live gaming streams a few times a week too (20% watch every day). With so much of their free time spent gaming or watching influencers/top players on platforms such as Twitch and Facebook Live, it’s unsurprising that gamers relish the strong sense of community and friendship enabled by streaming and multi-player gaming, and that 17% of the almost 2,000 comments garnered mention “community”.

Gamers feel that indie developers make the biggest contribution to innovation and better playing experiences, but are often stymied in both respects by the big publishers’ focus on profits. One gamer suggests: “My hope for the future is that game makers will try innovation over just using the flawed systems of today…making new franchises instead of just remaking old ones, increasing game prices so that developers don’t need such invasive microtransactions to turn a profit, and setting more accurate release dates so developers can have time to sufficiently test and design a game.”

“The gaming data we’ve gathered is a veritable goldmine for developers, publishers and influencers looking to understand what really makes gamer tick and equally what turns them off. This discussion proves that there is a huge appetite for communities of all kinds to come together online to conduct data discussions, and share positive stories and opinions. This is pure data democracy at work and what Qutee is all about,” commented Tim Wilson, co-founder and CEO of Qutee.

“Each year gaming is becoming more recognised as a professional field, and where once someone may have been ostracized for being a gamer, they are now accepted with open arms in a growing, and amazing community! My 2017 lowlight is backed up by the results from the Qutee discussion: the influence of ‘pay to win’ on new multiplayer games. Gamers should be rewarded through skill and time spent playing, not by who has the most surplus cash,” commented gaming data influencer and Gaming Today report curator homelespenguin.

View an infographic showing key data from the report here: 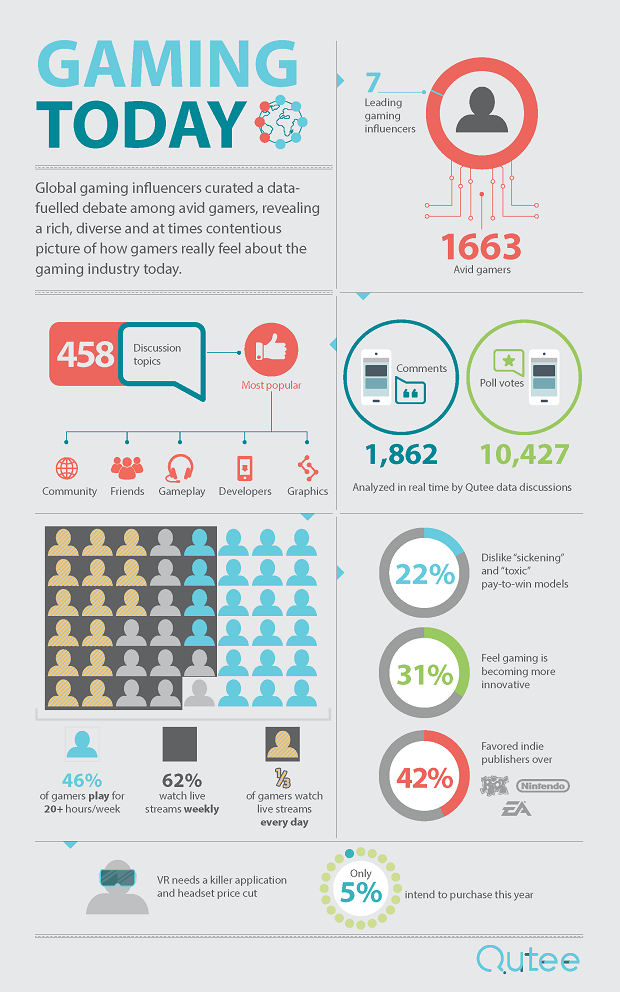 As anyone in the gaming ecosystem knows, it’s difficult to make your views heard or garner useful feedback via conventional online discussion platforms such as Facebook, Twitter and Reddit. That’s why leading gaming/tech influencers have turned to Qutee, which incorporates advanced sentiment analysis tools that make it easy to analyse masses of comments and poll data to gain granular insights from communities quickly. Gamers are also appreciative: their voices are heard, and they can easily follow the debate themselves using Qutee’s discussion filters.

The curated Gaming Today data discussion on Qutee in December 2017 is a case in point. Led by a panel of leading gaming/tech influencers – CapgunTom, Marzbar, Phylol, lionheartx10, Oakelfish, Huzzy, and homelespenguin – it shows what 1,663 gamers really think about gaming today. The Gaming Today report, published today, highlights some of the key topics and findings covered in the discussion.
To view the full data discussion, click here; to download a copy of Qutee’s Gaming Today report, click here.