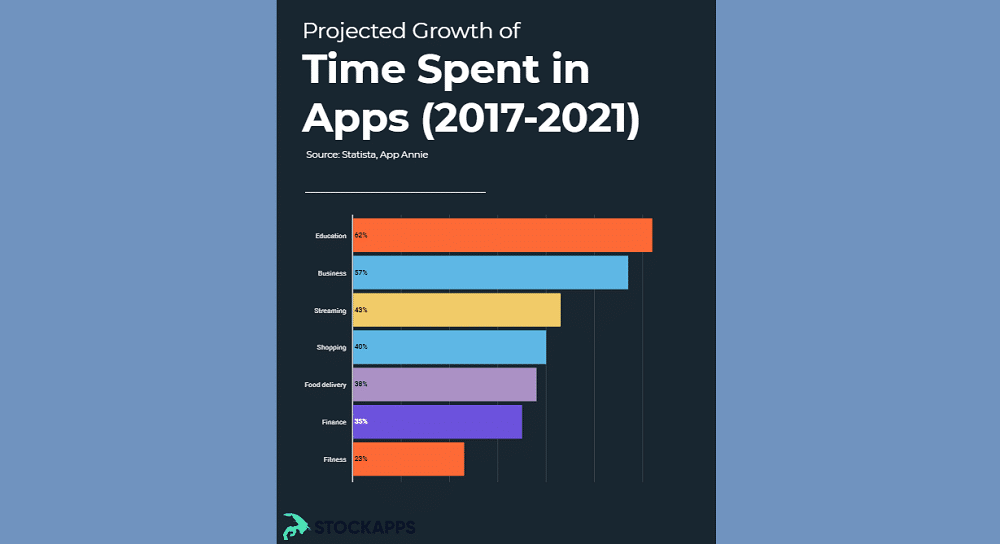 Education apps have enjoyed the most growth in downloads over the past four years, followed by business apps and shopping/ food delivery apps, according to new research.

COVID-19 forced a large part of the world to live a ‘new normal’ as people were forced to stay indoors to shelter from the dangers of the pandemic. Mobile devices took on an even more significant role than it already has in more recent times, as they became people’s portal to the outside world.
According to data presented by Trading Platforms, time spent on education apps on mobile devices is projected to have the largest 4-year CAGR in 2021 at 62%, while time spent on business apps have the second largest with 57%.

Time Spent on Education Apps Projected to Grow the Most – 62%

One of the consequences of the pandemic was the disruption of school for many young people. As the virus raged on, the education sector in many parts of the world was forced to shut school in all levels including University, and had to transition into ‘distance-learning’ at home. Parents of these children often also had to work from home themselves, delicately needing to balance work and looking after their children.

Different forms of entertainment, including for the younger age groups, were also forced to shut down which made the situation even trickier for parents as they sought alternative ways to engage their child. As a result, time spent on educational apps is projected to see the largest 4-year CAGR at 62% by 2021.

Businesses small and large also had to adhere to stay-at-home orders in many countries which led to many organizations turning to different tools to mitigate the effect on their productivity. As a result, business app usage comes at a close 2nd with a projected 4-year CAGR of 57%.

One of the business apps that became a household name due to the pandemic is the video conference app Zoom. Zoom was not only used by businesses around the world as many institutions such as schools and government also turned to Zoom. Many users also used the app to connect with their family members and friends who they have not had the chance to see in a while due to social distancing rules and stay-at-home orders.

Time spent on streaming apps is also projected to rise as people find alternative ways to entertain themselves during lockdowns. It takes 3rd spot on the list with a projected CAGR of 43% for 2021.

Shopping Apps rank 4th in terms of the largest projected growth with a 4-year CAGR of 40% in 2021. The significant growth in the sector is fuelled by grocery delivery services which innovated with contactless pickup options to adapt to the conditions of the pandemic. Another contributor to its strong growth is the strength of mobile shopping. 2020’s holiday sale season which includes Black Friday and Cyber Monday posted sales records despite the threat of the pandemic.

The economic uncertainty brought on by the pandemic meant that people were logging into the financial apps more than before. Unable to go to banks, consumers are turning to their trusted personal mobile devices for peer to peer payments, banking and investing. This is leading to a projection of a 4-year CAGR of 35%.
Fitness apps also saw a surge in demand as people looked to stay fit inside their homes as gyms all over the world were forced to shut. The extra time at home also meant that more people were willing to try exercising for the first time in an effort to find something productive to do during lockdowns. As a result, fitness apps are projected to have a 4-year CAGR of 23%.