Politics over price: 84% of consumers consider company ethics and values before making a purchase 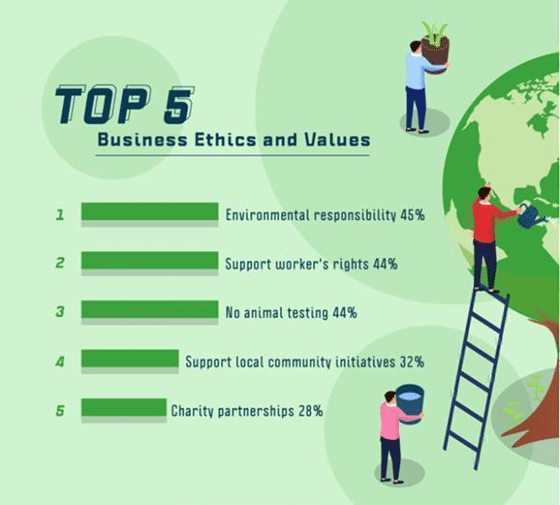 More than eight in ten consumers consider a business’ ethics and values before they make a purchase, reveals a new consumer survey. Environmental responsibility, supporting worker’s rights, and ending animal testing are the three most important business ethics in the 2020s.

The research, conducted by telecommunications company TollFreeForwarding.com, asked 2,000 American consumers about how businesses can secure their loyalty as we head into a new decade.

45% of respondents said they consider the environmental responsibility of a business before purchasing from their brand, followed by their position on worker’s rights (44%) and animal testing (44%).

84% of consumers said they consider a company’s ethics and values before making a purchase, with almost half (48%) saying they consider it to be of equal importance to the price of their products. 41% of consumers have boycotted a company if they don’t agree with the ethics or values it stands for.

When viewing advertising on a variety of platforms, digital formats were viewed as more untrustworthy than physical formats. 38% consider advertising via email to be untrustworthy, ahead of social media (35%) and online newspapers (28%). Traditional platforms such as TV (27%), radio (24%), and physical newspaper (22%) secured most trust.

The survey also confirmed that traditional methods are still the most popular way to earn and retain loyal customers. The most important pre-purchase factor to consumers is word of mouth recommendations, with 91% saying this was important to them. 91% also said online reviews were important to them, ahead of business ethics (89%) and published product reviews (89%).

71% of consumers said good customer service would make them more likely to purchase from a company again, followed by low prices (56%), a loyalty program (50%), and discount codes (50%).

Consumers were also quizzed on the industries in which they are most loyal to one company of their competitors. Older generations such as Baby Boomers (53-71-year olds) had a top-two loyalty industries of supermarkets and restaurant/takeout food. In contrast, respondents from Generation Z (18-23-year olds) selected the clothing and technology industries.

Jason O’Brien, COO of TollFreeForwarding.com said of the findings: “In the 2020s, customer loyalty can no longer be bought by simply keeping prices low. It’s easier than ever to research the ethics of your business and the values you stand for. The internet has put unprecedented power into the hands of consumers. It makes it even more vital to understand the values of your customers and align your company philosophy with them.

“Ethics and values are increasingly important, but our survey proves that good service and a strong word of mouth presence are the best ways to retain customers. As we head into a new decade, companies need to weave responsible business practices into their overall service.”

You can find more data from TollFreeForwarding.com’s research on their blog.