The jobs AI will take over first [INFOGRAPHIC] 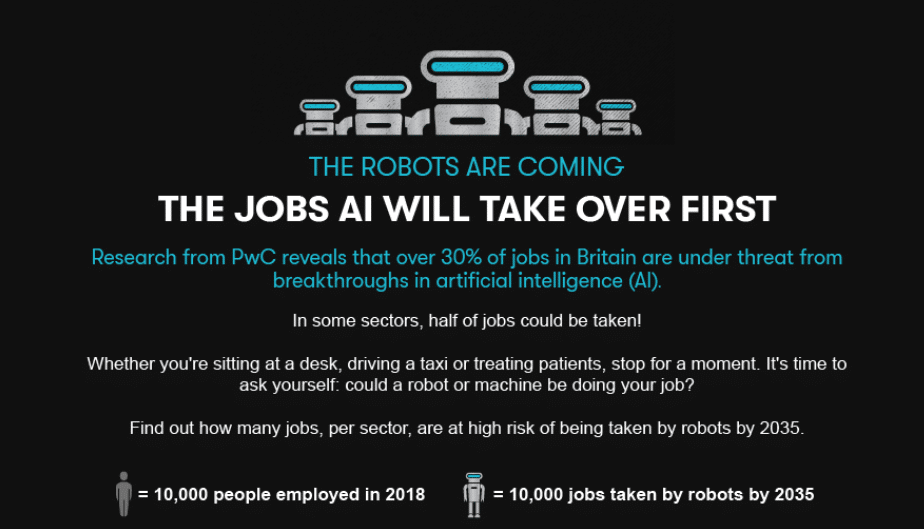 The robotic revolution is set to cause the biggest transformation in the world’s workforce since the industrial revolution. In fact, research suggests that over 30% of jobs in Britain are under threat from breakthroughs in artificial intelligence (AI) technology. A new report looks into which sectors are most at risk.

Machines have made jobs obsolete for centuries. The spinning jenny replaced weavers, buttons displaced elevator operators, and the Internet drove travel agencies out of business.

With pioneering advances in technology, many jobs that weren’t considered ripe for automation suddenly are. Alongside a growing need for fewer people in the workspace due to COVID-19, robots could well be the answer. RS Components has used ONS and PWC Data to reveal how many jobs per sector are at risk of being taken by robots by 2030, a mere decade away. Could your job be at risk, or change due to AI?

The people most at risk of their jobs being taken over by robots are those who work in catering, as 54% of jobs in this industry are at risk. Within the catering and hospitality industry, tech has already had a huge impact with Digital POS (points of sale), online food ordering apps, as well as technology to order your food at the table without the hands of service staff. Some restaurants have gone a step further, including Spyce, a restaurant in Boston which replaced human cooks with robot chefs.

Manufacturing is another industry where robots are expected to take over with 45% of roles within the industry at risk – that’s 1,170,000 potential jobs. Repetitive manual labour and routine tasks can be taught to fixed machines and mimicked easily, saving employers both time and money.

Other industries that could be affected in the next decade include construction, wholesale and retail as well as property housing and estate.

A sector where risk is lower for robots taking over roles is within law where only 24% of jobs are at risk. Although AI is able to automate some administrative tasks within law, AI isn’t set to replace lawyers anytime soon. A more realistic view would be to cut down the hours a lawyer may need to spend on tasks, but wouldn’t make them redundant entirely.

As many people lose jobs due to COVID-19, robots could be replacing roles quicker than ever, ensuring people’s safety rather than hurrying people back into offices and workplaces.

The future is not all doom and gloom. Automation is set to boost productivity to enable workers to focus on higher-value, more rewarding jobs; leaving repetitive and uncomplicated ones to the robots. An increase in sectors that are less easy to automate is also expected due to lower running costs. Wealth and spending will also be boosted by the initiation of AI seizing work. Also, there are just some things AI cannot learn so these jobs will be safe.