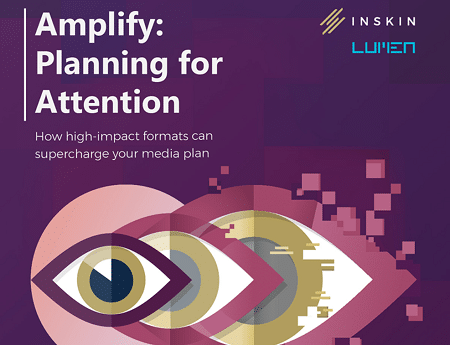 Over 170% more attention paid to standard ad formats that are creatively similar to other digital formats in the same campaign, according to new research.

The study from Inskin Media and Lumen Research has found that standard ad formats attract greater visual attention when they are creatively very similar to other digital formats within the campaign. The findings conclude that the traditional ‘matching luggage’ approach to creative execution is therefore key to maximising the impact of a brand’s ad spend.

The research, in which over 3,000 eye tracking experiments were carried out, showed that high-impact formats garnered 15x more attention than standard display formats. Within the same campaign, attention levels for MPUs shown after a high-impact format were amplified: they were 27% more likely to be looked at, looked at for 39% longer and were 140% more likely to have an impact, such as drive brand metrics and conversions, than MPUs shown after another identical MPU.

This amplification effect was much more significant when the creative style of the high-impact format and MPU was the same.

In Campaign C, the colour and copy on the high-impact format and MPU were the same, with strong product imagery, tagline and call-to-action. In comparison, the high-impact format and MPU for Campaign A were inconsistent: the background colours didn’t match, the product imagery was different and the MPU lacked a call-to-action. This demonstrates that the traditional ‘matching luggage’ approach to digital campaign execution is a powerful driver of effectiveness across a media plan.

With visual attention to display advertising a scarce commodity – only 12% of served digital ads are ever seen and only 4% are looked at for one second or more – amplifying the cut-through potential is vital. The study also uncovered a direct link between the length of visual attention paid to digital advertising, and brand recall, with 50% of users able to recall the advertised brand after 1-2 seconds of visual engagement time, vs 35% after 0-1 seconds, emphasising the importance of visual engagement beyond 1 second.

The research, part of Inskin and Lumen’s ‘Amplify: Planning for Attention’ study, highlights significant implications for media planning and highlights the importance of creative consistency across a campaign.

Dominic Tillson, Head of Insight, Inskin Media commented: “We know that the duration of visual attention paid to an ad has a direct impact on its performance. But until now it wasn’t clear whether creative consistency – or inconsistency – across different formats also affected attention levels.

These insights show that a focus on creative cohesion throughout the planning process will help ensure the best chance of campaign success. This is particularly pertinent for display advertising, as finding ways to increase the attention potential of standard ads, especially through optimisation methods that don’t require increased budgets, could help lift both short- and long-term profitability of digital ad spends.”

From May – July 2018, Lumen Research conducted over 3,000 eye tracking experiments amongst UK adults, making use of attention technology that captures users’ visual interactions with advertising via their webcam. The exploratory quantitative study involved three brands and three types of digital display formats (Inskin’s Pageskin Plus, Billboards and MPUs), served to the respondents in a variety of combinations over the course of two exposure sessions with a minimum time gap of 24 hours between exposures. Beyond eye tracking data, the controlled exposure methodology allowed for the collection of brand metric data.