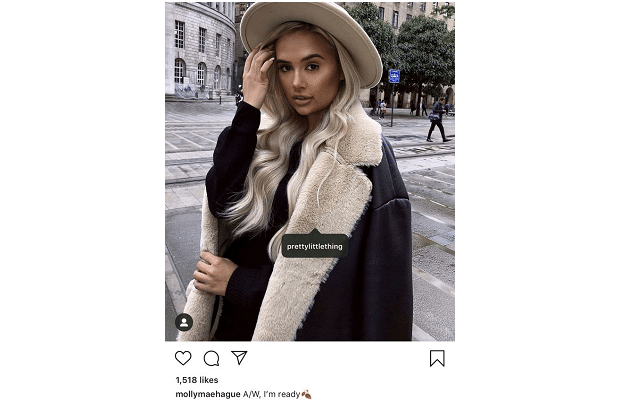 Social media influencer Molly Mae has as been reprimanded by the Advertising Standards Authority (ASA) for breaking its rules on Instagram.

The Love Island star has become the latest in a string of reality stars to have a complaint upheld against her after sharing a photograph of herself wearing a coat from Pretty Little Thing, with whom she has a commercial contract.

Hague, 20, captioned the image: “A/W, I’m ready [brown leaf emoji]” and tagged the online retailer, but did not write “#ad” or an equivalent note to disclose her partnership with the brand.

The complainant argued that the post broke advertising rules because it was not obviously identifiable as a marketing communication.
Pretty Little Thing responded to the claim by confirming that Hague is one of their brand ambassadors but the post in question was of her own volition and not prompted by the company.

The company described the post as an “organic” feed post that was not part of their contractual agreement with Hague and noted that all paid posts should be identified via a “paid partnership with PrettyLittleThing” tag.

Mae was made famous by the ITV show Love Island. The reality star is a brand ambassador for the popular clothing brand and, in accordance with her contract, any advertising for the company has to be clearly identifiable to her 3.6 million followers.

It comes after rival clothing company Boohoo had an advert banned last year when the ASA ruled it “made light of a potentially harmful social trend”.

The company put the phrase “send nudes” in a message sent to promote a range of clothes coloured to resemble skin.

Boohoo was told to make sure its advertising was “socially responsible” in future.