70% of Brits ‘more likely to remember a contextually relevant ad’ 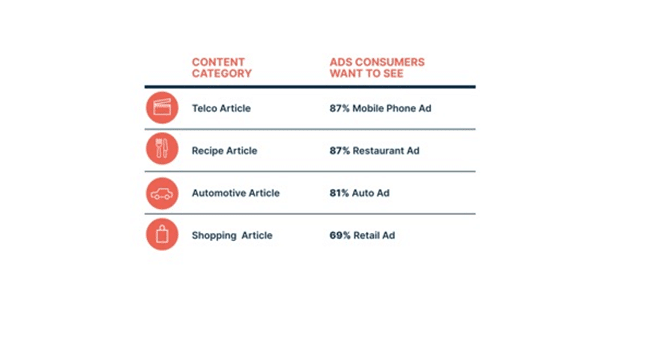 Nearly three-quarters (70%) of UK consumers state they are more likely to remember an ad when it appears next to contextually relevant content online.

The report, from ad verification firm Integral Ad Science, found that that memorability is important, as roughly two-thirds (65%) of British consumers have a more favourable opinion of brands that serve them contextually relevant ads.

The research provides an insight into how context and sentiment influence consumer perceptions of advertisements, and their respective brands.

When presented with real-life examples, the overwhelming majority of UK consumers (81%) prefer to see ads that match the content they are viewing. Additionally, seven in ten British consumers (70%) say their perception of an online ad is impacted by the surrounding content on the page.

The power of contextual relevance is also demonstrated across vertical categories:

Sentiment has an impact

The report also demonstrates that the sentiment of the content an ad runs alongside further impacts consumers. Almost three-quarters of consumers (73%) state that the positive/negative feeling conveyed in an article impacts their perception of a brand who has advertised alongside it.

When presented with examples from different verticals, UK consumer perception was seen to improve when an ad was placed alongside positive or neutral sentiment. Across the vertical samples, when an ad appeared next to a positive headline, consumer receptivity increased by up to 39% and favourability by up to 19% when compared to the negative headline.

Nick Morley, EMEA MD at Integral Ad Science, comments: “The data clearly shows contextually relevant ads impact consumers beyond their immediate response, forming part of their longer-term recall and favourability towards a brand. For marketers, this is essential to stand out within increasingly crowded marketplaces and drive action as a result of ads seen. As the industry approaches a key seasonal period, ad environments must be considered from both a contextual and sentiment perspective to capture long-term consumer interest.

Integral Ad Science’s The Power of Context UK Report highlights how context and sentiment influence consumers perception of advertisements and brands. IAS ran an online survey in September 2020 to determine the types of ads consumers prefer to see in different environments, and how the sentiment of an article affects their feelings toward the surrounding brands and advertisements. The survey was conducted in the UK, analysing responses from 500 UK internet users. Statistically significant differences have been calculated at a 95% confidence interval.

The full report can be viewed here