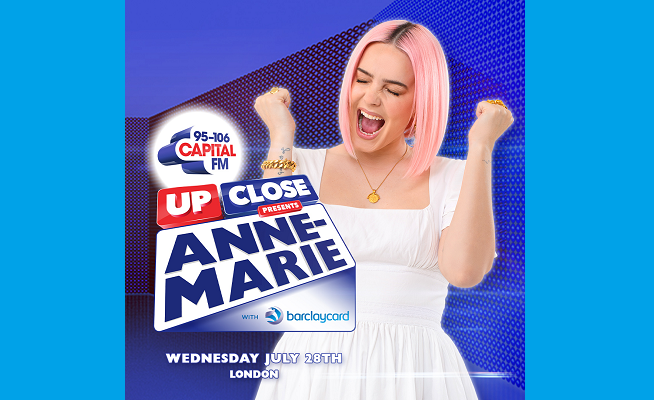 Global and Barclaycard have unveiled a new multi-platform AR campaign starring Anne-Marie to promote a series of exclusive live music events this summer, Capital Up Close with Barclaycard.

The national campaign running from July 12th to July 25th showcases the breadth of Global’s media portfolio by featuring outdoor, radio, digital audio and interactive 3D AR experiences in the run up to the first event in the series, Capital Up Close presents Anne-Marie with Barclaycard on Wednesday July 28th.

From today, holding a smartphone camera up to a Capital Up Close advert on a Global billboard will unlock the immersive creative.

Anne-Marie – one of the UK’s biggest stars – will step forward out of the billboard, surrounded by balloons and confetti to reveal how music fans can win tickets to the exclusive event hosted at London’s Under The Bridge venue.

The AR activation will also be posted via an interactive Instagram filter to Capital’s 1.4M followers and a competition to win tickets will be promoted to Capital’s 7.9M weekly listeners on air.

The AR experience has been built using the latest WebAR technology to allow users to access immersive experiences on their device without downloading any additional applications. Anne Marie’s digital twin has been captured using volumetric video technology which creates a wonderfully detailed, human 3D avatar.

Mike Gordon, Chief Commercial Officer at Global, said: “The past year made us shift our focus to highly immersive, virtual performances for audiences at home and together with Barclaycard we have created multiple successful events with some of the world’s biggest artists. In that time, we have been actively building on what we’ve learnt and enhancing our offering to deliver the best-in-class hybrid experiences. As a leading creative media company, Global prides itself on creating unparalleled campaigns that draw on our specialisms in audio, digital, outdoor, experiential and events. Now we have encompassed our media expertise within our brand experience team, advertisers can use the latest technology to engage audiences in highly saturated environments with 360-degree campaigns.”

Dan Mathieson, Head of Sponsorship at Barclaycard, added: “We are thrilled to announce our latest event with Global, this time with Anne-Marie and a live audience! Our entertainment partnership has not only enhanced our offering to Barclaycard customers through a series of new events, but also given customers access to some of the biggest names in music to enjoy live performances once more. It’s great to see the industry back to what it does best.”