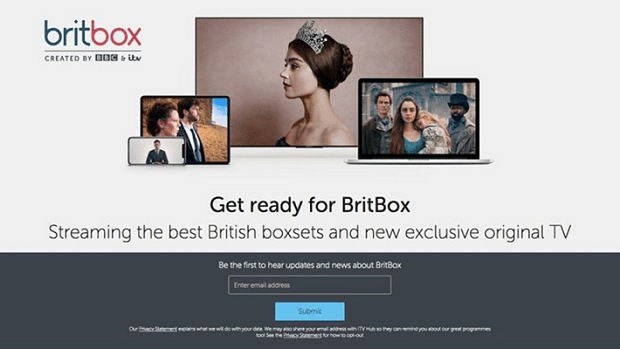 BBC and ITV have teamed up to launch BritBox, a video streaming service offering "an unrivalled collection of British boxsets and original series".

BritBox is already available in the US and last month it confirmed it had passed half a million subscribers.

The collaboration between the terrestrial TV companies will also feature “brand new commissions for British production companies specifically created for BritBox,” the company added.
The service is not scheduled to offer any advertising and will be subscription funded.

Neither company has confirmed a proposed cost for the new service, which they aim to launch in the second half of 2019, but ITV said “it will be competitive”.

ITV chief executive Carolyn McCall said BritBox will celebrate “the best of the past, the best of today and investing in new British originated content in the future”.

BBC director general, Tony Hall, said: “The service will have everything from old favourites to recent shows and brand new commissions.”

It offers viewers popular British shows such as EastEnders and Fawlty Towers and streams episodes of some shows within 24 hours of their debut in Britain, including Vera and Good Morning Britain.

The statement said that its success in the US showed the two companies have the technological know-how to launch and manage a streaming service and research showed that British viewers have “a real appetite for a new British streaming service”.

More than 12 million UK households have at least one streaming service and figures from the Broadcasters’ Audience Research Board (BARB) show the number of homes with one is growing by 20% annually.

Netflix, which recently announced it had reached 137 million subscribers worldwide, is available in the UK on the Sky platform.

As well as winning a host of awards for its series, one of the company’s movies, Roma, won three Oscars at last weekend’s ceremony and had been nominated for 10 in all.

Josh Krichefski, CEO at MediaCom UKm, commented on the move: “BBC and ITV’s new streaming venture is a positive – but ultimately necessary – step in a bid to play catch-up with the streaming behemoths of Netflix, Prime and Now TV (Sky). These platforms are investing heavily in their own original content in a bid for eyeballs, particularly among teenagers, with nearly half of teens watching TV on-demand most often. Yet BritBox also represents an opportunity to capitalise on an older generation, which could play to its advantage; the archive of classic programming will lock-in existing, older audiences who have spent years watching the nation’s leading TV channels, yet also look to offer younger viewers some brilliant original content on top of that.

“It is original programming that will ultimately keep viewers returning and paying money for the platform, though. Netflix spent an incredible £10bn on original content last year and invested in shows and films like Black Mirror and Roma, the latter bringing an Oscar-winning level of quality to proceedings. It’s a model that many have been investing in too, with Snapchat announcing plans to host original scripted programmes. I’m not so sure whether BritBox can match Netflix, Amazon, Sky and even Apple’s investment in its own content, but it will certainly be interesting to see if BritBox can put its money where its mouth is and truly be the home for the “best of British creativity”.”