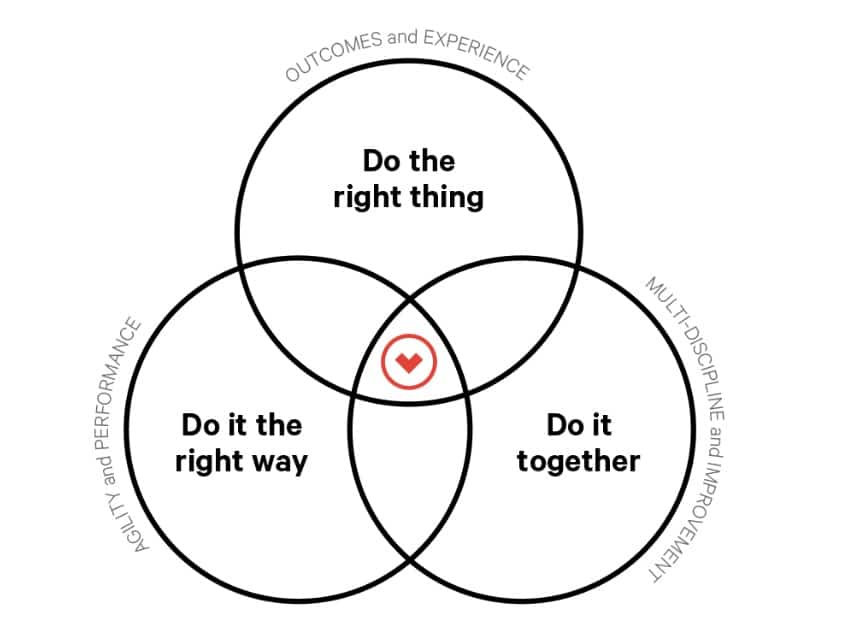 As businesses strive to meet the needs of today’s digitally empowered consumer there is a gap between businesses knowing what drives digital effectiveness and current digital practices, according to new research.

The findings were part of a larger study, commissioned by digital agency Code Computerlove, exploring the opinions and digital practices of UK businesses. It also compared the views of the top performing businesses with those of their mainstream counterparts.

It was quite a different story when the survey asked the same respondents about their actual digital practices.

It was a similar result looking at ‘belief’ and ‘practices’ regarding cross-disciplinary teams with just over 70% of all respondents implementing this approach (despite nearly all saying this is necessary for success). Again top-performing companies are slightly more advanced towards multi-disciplinary teams in comparison to their mainstream counterparts (81% versus 66%).

And looking at practices around long term versus short term goals; while a massive 92% say businesses that concentrate on the long term are likely to be more successful, in practice 53% actually admit to focusing on short-term targets. Only 35% of the mainstream group said that they focus more on long-term goals than short-term targets.

Other key findings in the survey include:

CEO of Code Computerlove, Tony Foggett says, “While our survey was primarily designed to show levels awareness around Product Thinking, a mindset and approach to digital product development, it was striking to see the difference between what companies think will help them drive digital effectiveness and what is happening within their businesses.

“There is clear consensus that digital approaches need to be customer-centric, agile and data-driven, all principals that fall into the Product Thinking mindset that we implement. But all business – whether they are out performing their competition or not – seem a way off actually truly embracing these techniques.

“The survey also highlighted that while most companies agree what the basic principals of a digitally transformed business are, it is the EXECUTION that makes the difference between best performers and the rest. The gap between thinking and doing is much smaller for top-performing companies than it is for their mainstream counterparts.

“So what’s stopping businesses from applying a Product Thinking approach as a means to get ahead? One theory is the degree to which they can, and have, changed their business culture. As businesses move from the traditional ways of working to the more agile/adaptable approaches required for the 21st century they come up against deeply ingrained structural and cultural barriers.

“While agreement with the principals of a digital-first organisation is all but unanimous, the majority of businesses still have cultures that can best be described as retrograde.” Foggett added, “Ultimately ‘Product Thinking’ is a cultural model that pertains not only to a mindset (a collective drive for effectiveness by continually growing value for the customer and company) but also the methodologies, roles and organisational design required to see the approach through.

“While it’s impossible to prove that it’s the implementation of these Product Thinking ideas that is responsible for ‘success’ in the top performing businesses the correlation is extremely strong. In organisational culture, management approach, development philosophy, every area of business practice we looked at showed the firms who acted on the product philosophy were more likely to be successful.”