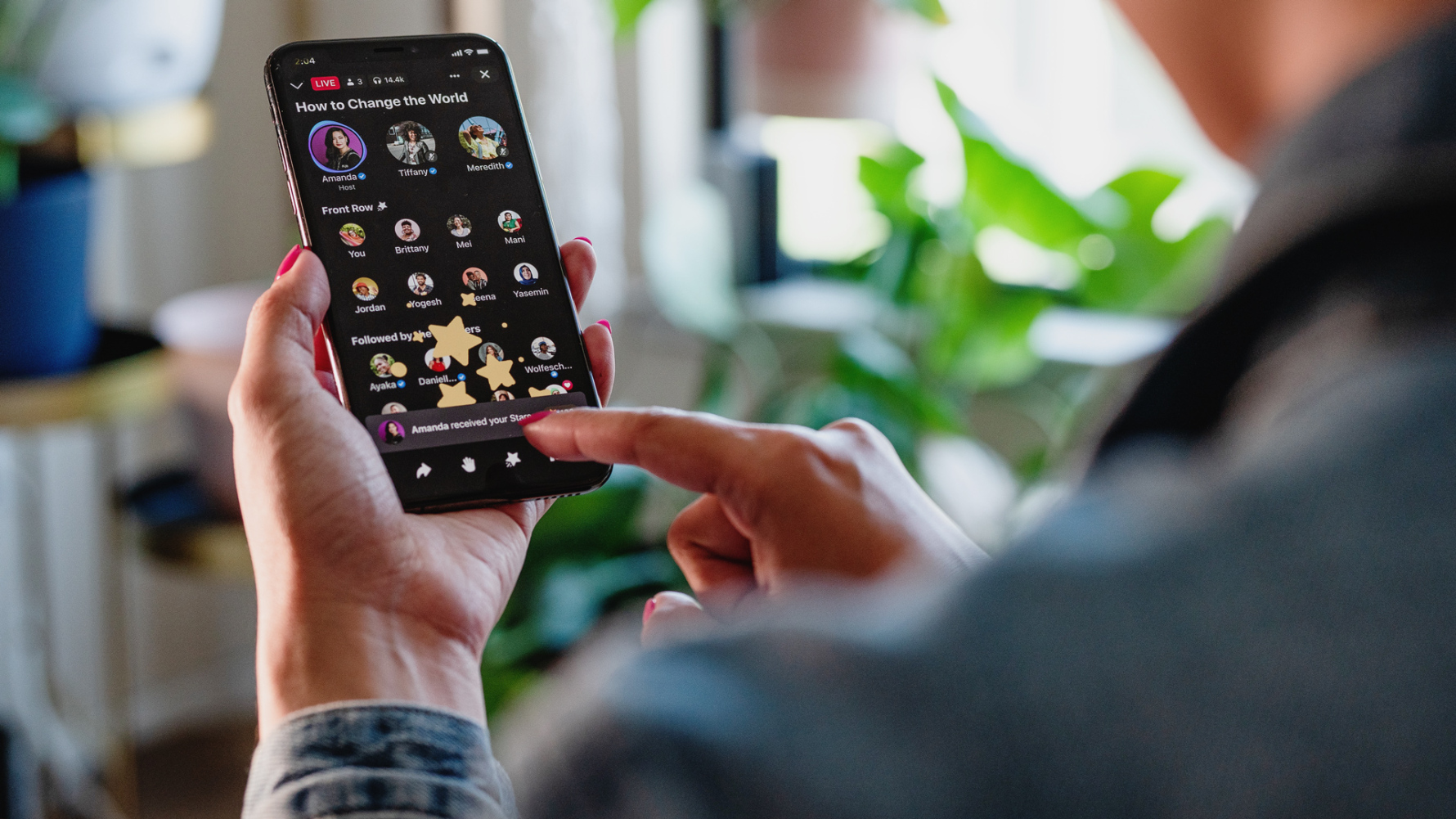 Facebook is officially launching its live audio rooms option, as well as podcast discovery and playback within the app.

After announcing the coming option back in April, then testing it with users in Taiwan over the last month, Facebook is now bringing its live audio rooms feature to selected public figures and Facebook Groups in the US.

Audio rooms launched by people and/or groups that you follow will appear at the top of your Facebook News Feed, above the Stories panel. 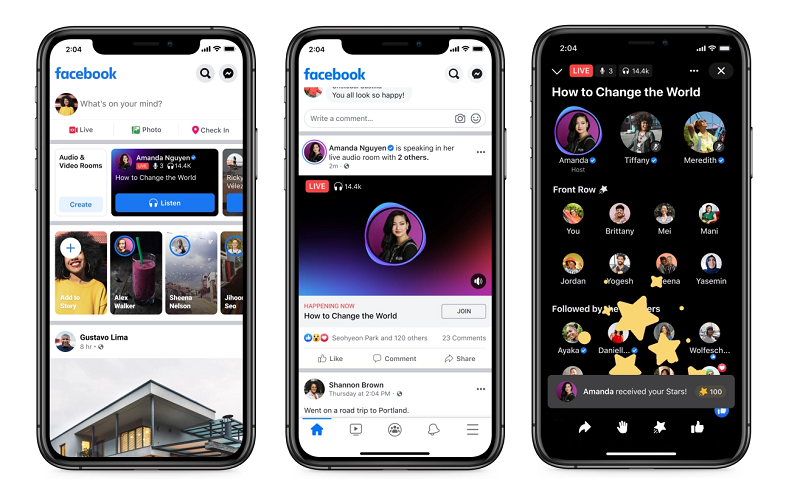 Users will be able to sign-up for reminders of upcoming audio rooms, similar to events, while users can also tap into audio rooms from feed posts.

The user interface of Facebook’s audio rooms very similar to Clubhouse and Twitter Spaces, with profile images of the room hosts at the top, with listeners below that.

In a launch statement, Facebook said: “Listeners can also offer support and show appreciation to the public figure host of the Live Audio Room by sending Stars, which bumps those listeners up to the “front row.” The “front row” is a special section that highlights people who sent Stars, so hosts can recognize supporters (and maybe even give them a shout out during the conversation!).”

Creators can monetize their Facebook efforts, with Stars being displayed on-screen to get the attention of the hosts.

Hosts will be able to invite speakers in advance, or choose listeners during the stream to join the conversation. For audio rooms within Facebook Groups, admins will be able to control whether moderators, group members or other admins are able to create a Live Audio Room.

“In public Groups, both members and visitors can listen to the Live Audio Room, but in private Groups, only members can listen.”

Rooms will be limited to 50 speakers, while there’s no limit to the number of listeners that can tune in.

In addition to this, Live Audio Room hosts will also be able to select a nonprofit or fundraiser to support during their conversation, with listeners and speakers able to donate in-stream.

The initial roll-out will see selected public figures and groups able to launch audio rooms, with Facebook tapping a range of popular creators to promote the option:

• Grammy-nominated electronic music artist TOKiMONSTA will discuss female excellence and overcoming obstacles
• American football quarterback Russell Wilson will talk about how to train your mind like an elite athlete
• Organizer, producer, independent journalist and scholar-activist, Rosa Clemente will host a discussion around affirming Blackness in the Latinx community
• Hear what it’s like to live the life of a professional esports player in a Live Audio Room hosted by streamer, entertainer, and internet personality Omareloff
• Social entrepreneur Amanda Nguyen will speak with fellow changemakers about pursuing justice and making progress in an extraordinarily polarized time 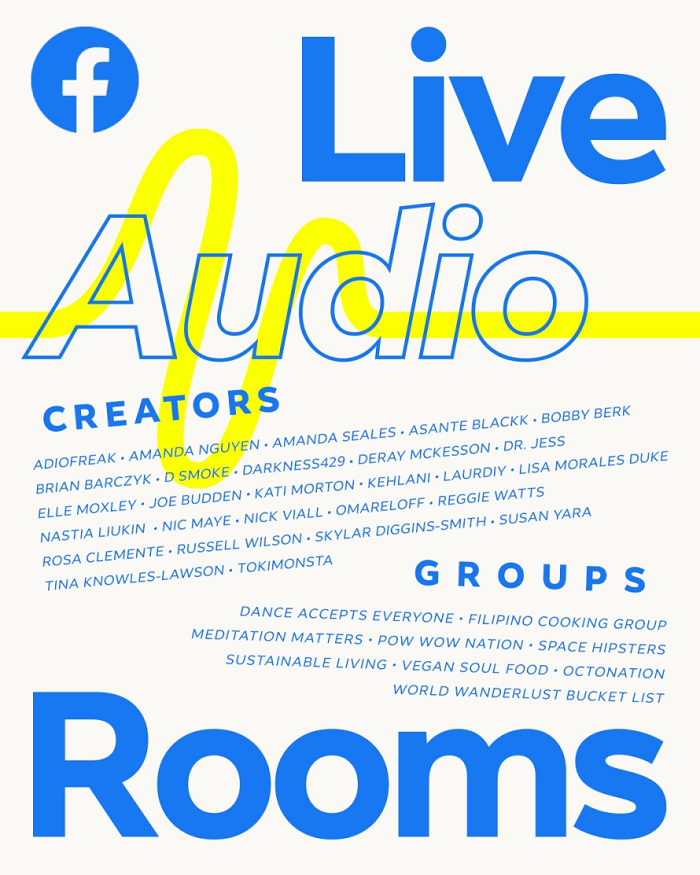 Facebook CEO Mark Zuckerberg also tested out the option last week, which pointed to the coming launch, and with these popular users also trying out the function, it’ll no doubt see a lot of Facebook users tuning in, and getting a feel for how its audio social tools will work.

“In the coming weeks, we’ll expand the ability for more public figures and Groups to host a Live Audio Room and introduce new features for both experiences in the coming months.”

Twitter’s Spaces looks like the biggest competitor to facebook for audio chatrooms, with Clubhouse downloads slowing on iOS (but growing on Android where it recently launched).

In addition to this, Facebook’s also officially launching its new podcast support options, which will enable users to discover and listen to podcasts, without having to leave the app.

Facebook’s been testing the new options over the last month, and is now set to launch with a selected group of popular podcasters.

The firm said: “To start, the initial slate of podcasts will include Joe Budden of The Joe Budden Podcast; “Jess Hilarious” of Carefully Reckless from The Black Effect Podcast Network and iHeartRadio; Keltie Knight, Becca Tobin, and Jac Vanek of the LadyGang; and Nicaila Matthews Okome of Side Hustle Pro. We’ll continue to add more podcasts in the coming weeks.” 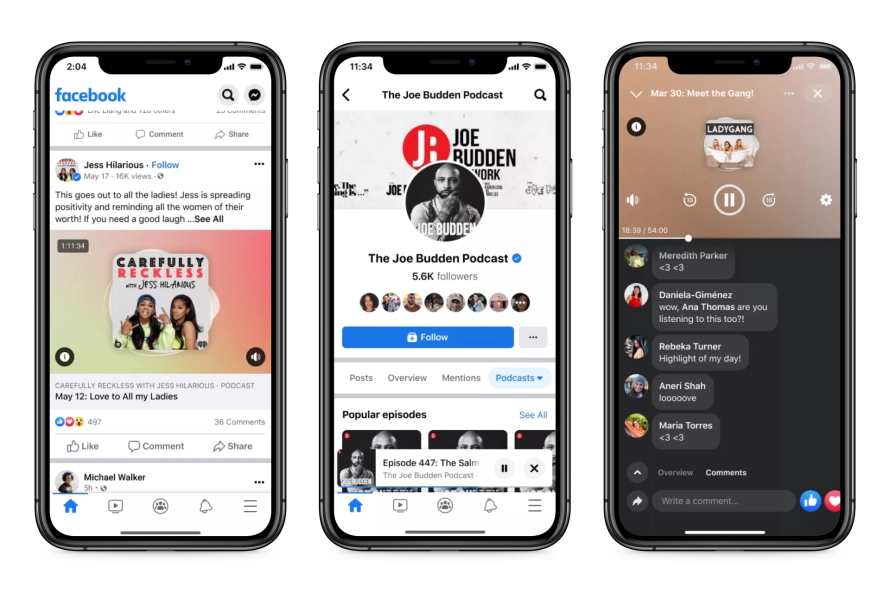 The option will facilitate podcast discovery within the Facebook app, along with “a miniplayer or full-screen player experience” for playback in-stream.