Ignorance around advertising ‘is putting the free internet at risk’

The representative survey from The Trade Desk quizzed 1,500 people in Great Britain, revealing that only a quarter (27%) of Brits claim to know how the internet is funded, with four in ten (41%) not realising that advertising could be largely responsible for generating revenue for online publishers.

The research reveals that 10% believe that internet providers foot the bill for the internet, while 8% believe Google and Facebook deserve thanks for funding the content they access for free. Other theories include taxes, with one in 20 (5%) believing this is where the internet finds its funds, while one in 50 (2%) speculate that it could be paid for by China, or even the military.

Seven in 10 Brits (73%) claim to have no idea how the internet is funded and this lack of understanding arises, in part, from a failure by the advertising industry to clearly communicate the value exchange of the internet. In fact, around one in five (22%) recognise that many websites and apps would simply cease to exist without data-driven ads, as they wouldn’t be able to make money and keep their services running. And only 15% of Brits realise that a large proportion of websites and apps would be forced to charge them for access to their content if they weren’t able to use data to frame relevant ads around it.

This lack of awareness means Brits expect a subsidised service, with about four in 10 (39%) revealing they would not be willing to pay for internet content, and the same proportion stating they wouldn’t pay more than £5 a month to access the internet without advertising. Yet, only half (50%) of people are willing to share their data in exchange for free content and over a third (35%) admit to using an ad blocker, preventing themselves from being served ads and damaging publishers’ ability to fund free content. Research by the Association for Online Publishing suggests that publishers lost over £18 million in 2018 as a result of ad blockers. 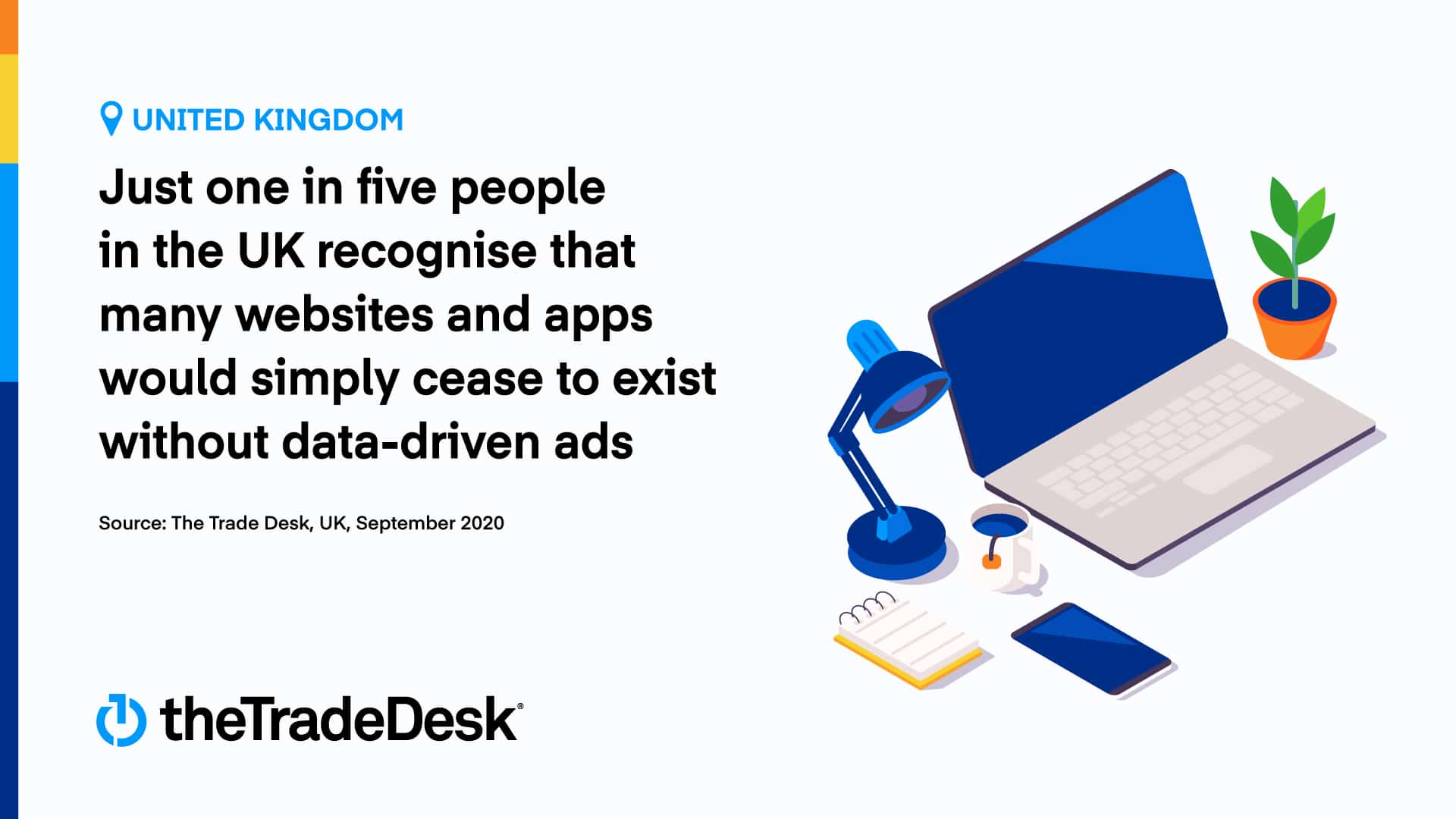 Philippa Snare, SVP of EMEA at The Trade Desk, commented on the research: “For too long, consumers have been plagued with pop-up consent banners that fail to clearly communicate the value exchange that publishers rely upon to provide users with quality free content. This disconnect is damaging and if left unaddressed will have irreversible consequences for publishers and their ability to survive. We must act now, which is why we are leading an industry-wide initiative to build a new, cookie-less, independent identity solution. This open-source system aims at creating consistency across the internet, offering an identity solution that simplifies browsing, while clearly explaining the value exchange to consumers.”

She continued: “The new solution will also empower consumers to have control over their data and how it’s used. Upgrading the current identity technology is critical for rebuilding trust in the advertising industry and preserving the free internet – for the benefit of consumers, publishers and advertisers alike.”

Consumers’ appetite for an ad-funded existence extends far beyond the internet.

Utility bills and grocery shopping top the list of services Brits would most like to be subsidised by advertising, selected by 40% and 39% respectively. These are followed by public transport (28%), Netflix (27%), flights (21%) and national rail journeys (19%).

In August 2020, The Trade Desk commissioned a representative survey of 1500 consumers, aged 18+, in the UK, with the market research company Appinio in order to investigate whether people understand how the internet is funded.