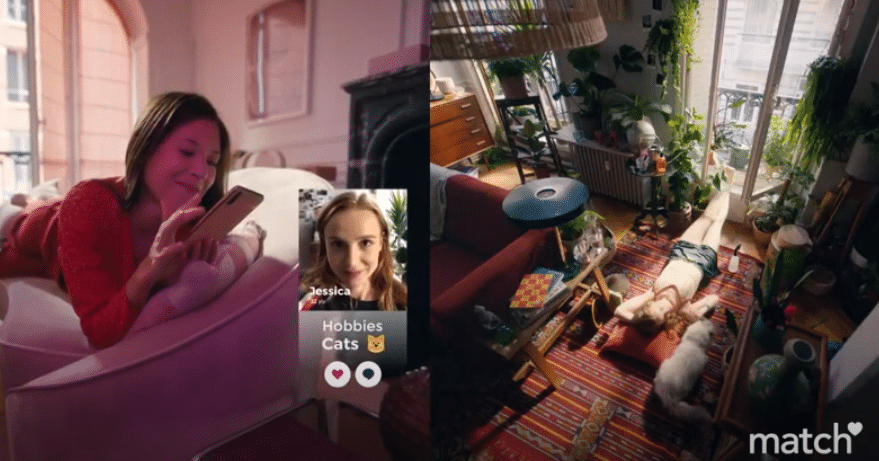 Online dating platform Match has launched a new campaign, which aims to showcase a couple’s first moments, demonstrating that commitment is there right from the very start.

For this latest instalment to its “Start Something Real” brand platform, Match, in partnership with Marcel, has chosen a duo of directors named Réalité, a couple in real life as well as behind the camera.

The campaign features a creative use of the “split screen”: it shows two single people, each in their own universe and in their daily life, supported by specific color palettes for each character.

Thanks to the “Match Effect”, highlighted by the presence of the Match app within the films, the singles are brought to one place at the same time and enjoy their first moments together.

Eight formats of the campaign will be broadcast in eight countries across TV, radio and digital with immersive story formats, filters and other engaging content.

Jérémie Bottiau, Creative Director, Marcel, said: “The split screen is actually a great metaphor of the process by which singles decide to join Match, because there is a real desire to get out of the frame, to literally take a step towards the other person and start a real story. Stories that we wanted to be seen as modern and authentic, simple and touching at the same time. The times we are living in need stories like these: we all need to witness the beginning of something beautiful.”

Eight formats of the campaign will be broadcast in eight countries: a 60 second film, a true ode to committed singles reminding them that every great story begins with them, three 20-second films unveiling the beginnings of three meetings, four 10-second films focusing on Match features (one-on-one video, highlighting things singles have in common… and of course the events!).

The campaign has gobne live and is being broadcast on TV, radio and digital, with immersive story formats, filters and other engaging content.

Jérôme Rivière, VP Brand & Consumer Meetic Group, said: “This new campaign, which celebrates the commitment of single people on Match, is especially appropriate after a year in which the need for connection and love has been essential in our lives. 1.6M people have already met their partner on Match and we wanted to remind people that every true story begins with two sincere single people taking a first step.”