Media usage during lockdown: TV and digital up at expense of other formats 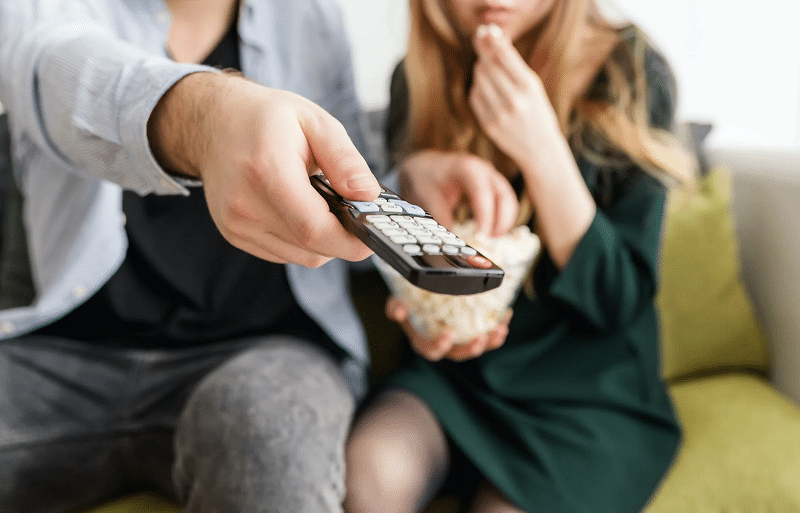 The UK’s social distancing measures due to coronavirus are having a measurable impact on the amount of time people are spending with digital and traditional media, with TV time among adult viewers up 10 minutes per day in 2020, according to new research.

Total media time will increase by more than 4.7% in 2020, driven by a 9.3% increase in time spent with digital media. These are, by far, the highest growth rates we’ve seen since 2014, driven by higher media consumption amid the pandemic. This year, total media time for UK adults will increase to an average of 10 hours, 33 minutes per day. That’s an increase from our Q4 2019 projection of 10 hours, 7 minutes.
“All forms of in-home media we cover, such as digital media and traditional TV, are seeing increased time spent while people in the UK are social distancing,” said eMarketer forecasting analyst Peter Vahle. “Traditional media types that reach people largely out-of-home, such as print media distribution and traditional radio, are seeing steep declines during this period.” 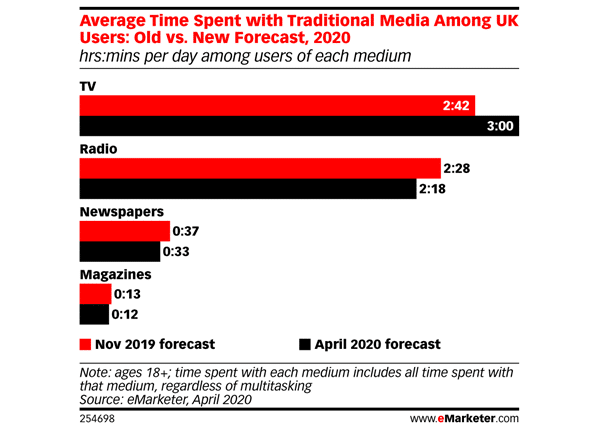 Daily TV time among television viewers in the UK ages 18 and older is up 6.2% (10 minutes) year over year, reaching an average of 3 hours per day. That’s the first time since eMarketer began tracking time spent in 2009 that time spent with TV has grown. Our previous estimates from Q4 2019 (prior to the pandemic) predicted a 4.3% decline to 2 hours, 42 minutes.

“Since the outbreak of the pandemic, people have had a huge appetite for news content, which has been booming across all media types, but particularly for traditional TV,” Vahle said. “However, increased viewing time is not translating into increased ad spend, as marketers withhold budgets amid the economic uncertainty.”

Time spent with print media (newspapers and magazines excluding digital versions) among adult print readers is taking an even bigger hit than expected. We now expect it to drop by 4 minutes in 2020 to 40 minutes per day. Our previous forecast had expected traditional print time to drop by just 1 minute year over year. Newspaper time will drop just more than 4 minutes to 33 minutes per day; magazine time will drop by 1 minute to 12 minutes per day. These are bigger declines than previously predicted.

On the digital side, time spent is up considerably, driven largely by video. Among UK adult video viewers, daily time spent is up from 2 hours, 1 minute last year to 2 hours, 20 minutes this year, a 15.3% jump. Our previous forecast only predicted a 7-minute increase.
“People have been streaming a lot more video content from home,” Vahle said. “Interestingly, in-home entertainment is one of the few categories people say they are actually willing to spend more money on during the crisis. As a result, we increased our time spent with video, including the platforms we break out: Netflix, Amazon Prime Video and YouTube.”

“With in-person socializing paused, social media has picked up much of the slack,” Vahle said. “While people in the UK remain at home, we expect to continue to see higher engagement across social media platforms. The uptick in activity has led to new behaviors, such as streaming on Instagram Live and participating in TikTok challenges, which will likely stick around long after the pandemic fades.” 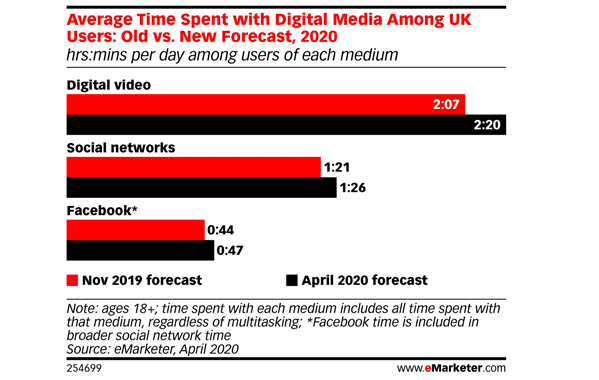