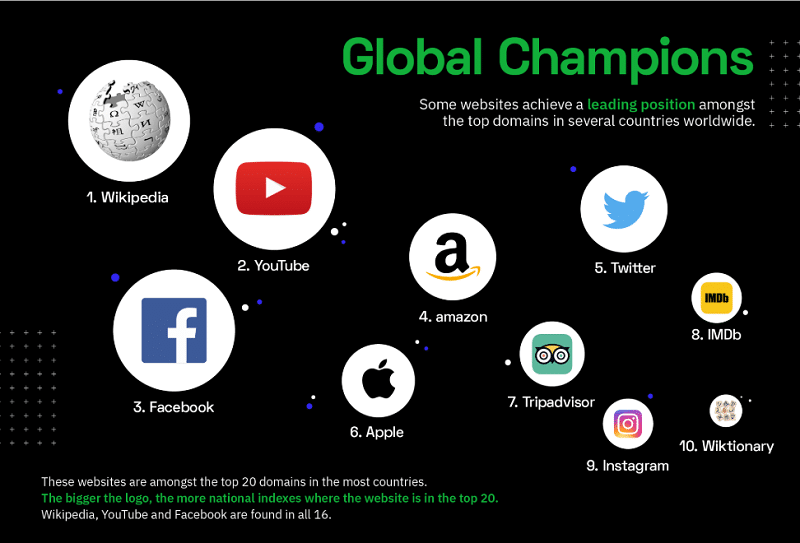 Wikipedia is the most visible website in Google’s organic search results globally, but YouTube is catching up very fast according to new research.

An analysis of the best performing web brands in organic search in 16 countries (including the USA, UK, Germany and France). Image sharing social network, Pinterest, and online game site, Poki, also make major gains in Google search globally, while Wired magazine is a rising star in Google searches in the USA.

The findings come from Searchmetrics‘ annual SEO World Rankings study which analyzed search results from 16 national Google indexes around the globe to determine the top ten performers in organic search in each country during the whole of 2019. This allowed Searchmetrics to identify the overall list of ten ‘Global Champions’ based on the number of countries in which a site ranks in the list of top performers nationally and how highly it features in each list.

Wikipedia vs YouTube: The fight for Google search dominance

Wikipedia remains the most visible web domain in Google searches globally but has lost search visibility in 10 out of the 16 countries that were analyzed. At the same time, YouTube is quickly gaining ground, with improvements in search performance in 14 countries.

“Wikipedia has always performed well in search because of the sheer breadth of up-to-date content it includes about so many topics. But this year YouTube came in a very close second,“ said Stephen Bench-Capon, senior content marketing manager at Searchmetrics. “In fact, YouTube did overtake Wikipedia for the first time in the US search performance on Google in September 2019, but just fell short in the yearly average. It’s still very close and next year we could potentially see YouTube on top.“

This is part of a trend which has seen video becoming increasingly prominent in desktop searches which was triggered when videos started appearing in a carousel format in the search results in 2018. The carousel format, which allows searchers to click and toggle through a larger number of videos, coincided with a dramatic increase in the number of search queries for which Google includes a video from YouTube in the results.

“The competition between Wikipedia and YouTube is part of a wider online battle between text content and video content,” said Bench-Capon. “We know that people are accessing and consuming more and more video online, and Google’s results reflect this, but for now at least, Wikipedia and text content are still number one”

Pinterest had a very successful year, appearing among the top ten winning web domains in Google search in eight countries – and making it into the top 50 in another five.

“Pinterest performed really well in search last year and it has continued to make gains into 2020,“ said Bench-Capon. “The site has a massive amount of results in the image boxes which Google integrates into search results, and it really dominates this area. For example, in the UK, our data shows that an image from Pinterest appears in an image box on the first page of Google for two thirds (66%) of the keywords the site ranks for.“

In mobile search, many dictionary websites were among the big winners on Google in many countries during the year. For example, definitions.net made big gains in search in the USA and UK. In Germany, gutefrage.net showed major improvements as did larousse.fr in France.

“This is partly down to a change we’ve observed in the layout on mobile search engine results pages (SERPs), where Google now directly displays FAQ answers as additional links for the site that is ranking number one anyway,“ explained Bench-Capon. “This happens when the site has several answers to questions relevant to the search query and takes advantage of this by correctly implementing its FAQ markup. As a result, one site can occupy a huge amount of the already limited mobile screen space.“

The full results from Searchmetrics’ SEO World Rankings 2020 are presented in an infographic here.