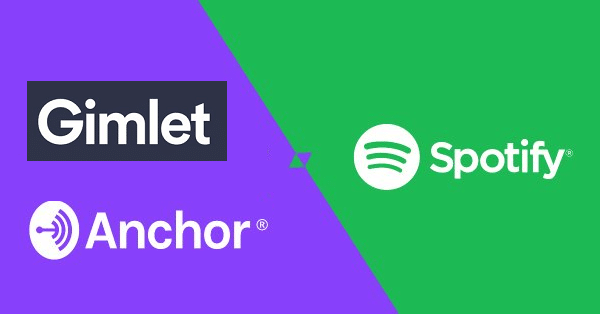 Spotify has bought two of the largest podcasting producers in the world, Gimlet Media and Anchor.

Daniel Ek, co-founder and CEO at Spotify, made the announcement in a blog post.

These companies serve two different, distinct roles in the industry.

Gimlet is one of the best content creators in the world, with unique, celebrated podcast shows like Homecoming, which was recently adapted into a critically acclaimed show on Amazon Prime, and the internet culture hit Reply All.

And Anchor has completely reimagined the path to audio creation, enabling creation for the next generation of podcasters worldwide–15 billion hours of content on the platform during Q4. These companies are best-in-class and together we will offer differentiated and original content. Gimlet and Anchor will position us to become the leading platform for podcast creators around the world and the leading producer of podcasts.

Ek said he believes the music and audio industry, which is currently estimated to be worth $100 billion, is actually as valuable as the video industry, which has about a $1 trillion dollar market cap. In order to take advantage of the growth Ek predicts for the audio industry in the future, Spotify will double down on podcast content.

“This opportunity starts with the next phase of growth in audio–podcasting,” Ek said. “There are endless ways to tell stories that serve to entertain, to educate, to challenge, to inspire, or to bring us together and break down cultural barriers. The format is really evolving and while podcasting is still a relatively small business today, I see incredible growth potential for the space and for Spotify in particular.

“Based on radio industry data, we believe it is a safe assumption that, over time, more than 20% of all Spotify listening will be non-music content. This means the potential to grow much faster with more original programming–and to differentiate Spotify by playing to what makes us unique–all with the goal of becoming the world’s number one audio platform.